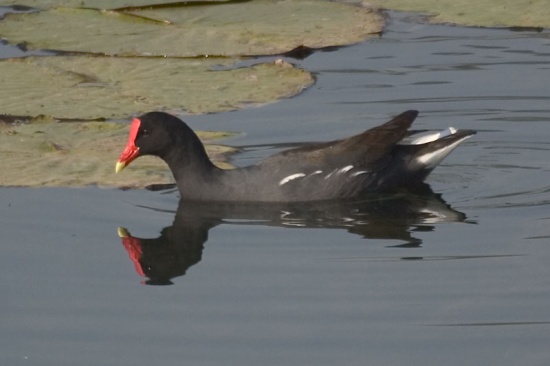 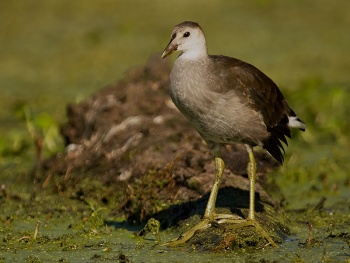 Common Moorhen, recently found as a vagrant in Alaska and suspected in easternmost Canada, is very similar but differs in the more rounded top of the bill shield (only distinguishable in adults), and also different calls. 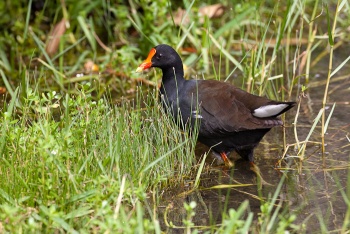 From southern Canada south to Central and South America, on the Hawaiian Islands and Galapagos Islands. 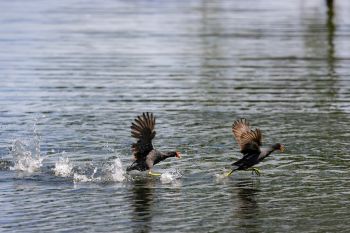 Virtually any kind of freshwater: marshlands and swamps, lakeshores and riverbanks, often in urban parks and sewage ponds. Frequently feeds on grass adjacent to water.

Runs across the water before take-off. Legs trail behind. Swims with a jerky head movement. Often seen swimming and feeding while doing so, but also feeds during excursions up on e.g., lawns.

Omnivorous. Grazes on land and dives, or dabbles, for vegetable matter, small crustaceans and insects.

Occurs in all months of the year; may rear up to 8 broods/year. The nest is a bowl of rushes and reeds concealed in dense aquatic vegetation well above the water level; built by both sexes. Clutch: 4-9 eggs (sometimes up to 11, possibly laid by 2 females). Eggs: Dark buff to grayish white, spotted, freckled and blotched with red-brown and slate; weigh about 25 g. Incubation: 21-22 days by both sexes; the female incubates only by day and the male incubates at night. Fledging: 40-50 days; young dependent on parents for 1-6 weeks after first flight.

Primary call is a is a rich nasal “laughter” not heard from similar Common Moorhen. Also a wide variety of clucking and chattering calls, sometimes repeated for long periods.

Search for photos of Common Gallinule in the gallery

Search for photos of Common Gallinule in the gallery