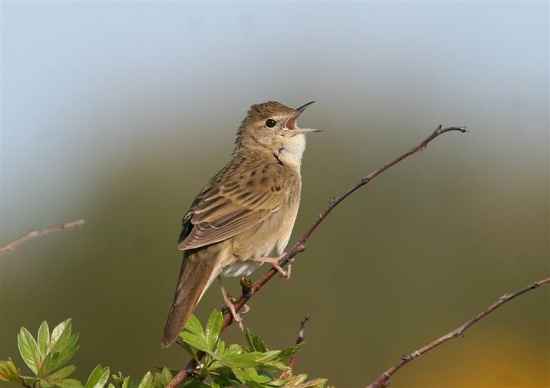 A dull brown bird with streaked upperparts and a broad rounded tail which has streaks underneath. A fluffy white throat is often obvious when the bird is singing.

The lack of an eyestripe eliminates Sedge Warbler. Some birds can look remarkably unstreaked and this can often lead to confusion with Savi's Warblers. However, even the most unstreaked Grasshopper Warblers will always have a dark alula.

By far the most widespread and common of the Locustella warblers in the Western Palearctic.

Breeds over much of the British Isles (but uncommon) and from northern Spain and western France across Europe north of the Alps to the Black Sea and east to the Urals. In the north occurs in southern Norway and Sweden, the southern half of Finland and Russia to about 61 deg N.

A summer visitor to the Western Palearctic arriving in April-May and departing for wintering grounds in sub-Saharan Africa and India in August-October. Unobtrusive on passage and rarely seen. Occasional winter records from northwest Africa.

Vagrants recorded in Iceland, on Malta and Cyprus, the Middle East, Egypt and on the Cape Verde Islands.

Nominate intergrades in the Urals with very similar eastern race straminea, which has been recorded in Britain.

Found in wet and dry situations in grasslands and meadows, nettlebeds; reedbeds, cereal fields and often along streams, canals and overgrown ditches.

Search for photos of Common Grasshopper Warbler in the BirdForum Gallery

Search for videos of Common Grasshopper Warbler on BirdForum TV