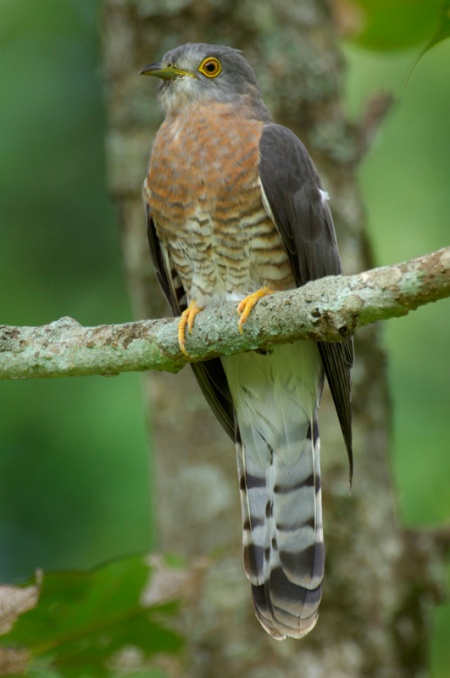 33cm (13 in)
Ashy grey above, grey chin, pale rufus brown breast and grey-and-rufous barring on belly. The tail is banded with clear whitish bars. Ciceliae in Sri Lanka is much darker, has broader dark tail bands and is much more heavily barred.

Found in most parts of India (except for the northwest and far northeast), Nepal, Bhutan, Bangladesh and in Sri Lanka. Recently found in Pakistan (Punjab).

Most birds don't migrate, but altitudinal movements known. Records in Oman and Thailand suggest some movement, possibly related to the weather. 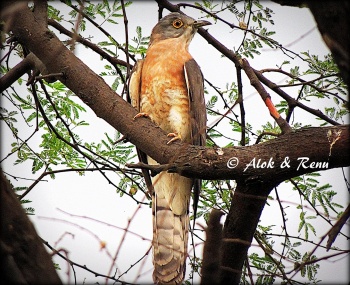 Some authorities place this species in genus Cuculus.

Common in wooded country, plantations and gardens. Usually found below 1000m, occasionally up to 1500m. In Sri Lanka between 600 and 2200m.

Often hard to see but very easy to hear.

Breeds from March to July (earlier in Sri Lanka). Like many cuckoos brood-parasitic. Hosts Laughingthrushes and Babblers, e.g. Jungle Babbler. The young throws the host's chick out of the nest. 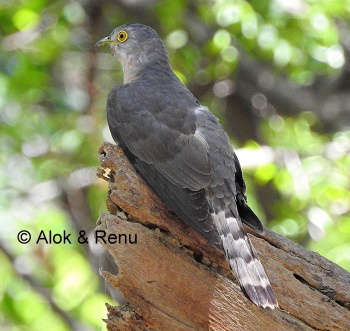 Feeds on insects, mainly caterpillars but also cutworms, grasshoppers, locusts and others. Takes fruits of banyan and wild bananas.

Song is a series of shrill and loud whistles, rising gradually and getting increasingly hysterical near end. In breeding season sings through day and night much to the dislike of local people.

Search for photos of Common Hawk-Cuckoo in the BirdForum Gallery

Search for videos of Common Hawk-Cuckoo on BirdForum TV