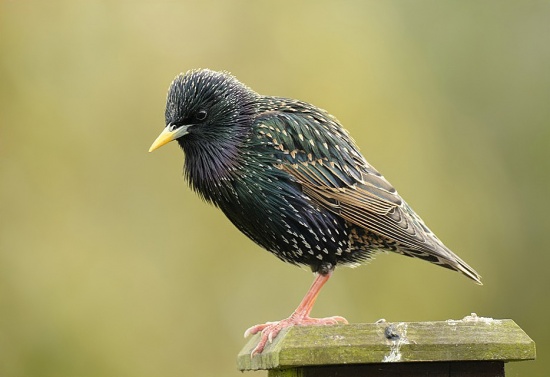 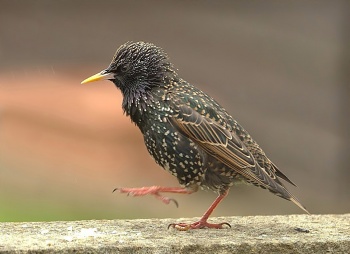 Length 21–21.5 cm (8¼ in), wingspan 37–42 cm, weight 55–100 g
A medium-sized, blackish, short-tailed songbird, often forming huge flocks. Compact shape, with triangular wings in flight. Wide variation in plumage with age, and some variation with time of year. Both sexes similar, although the female is slightly less glossy than the male, and differences in bill colour in spring. 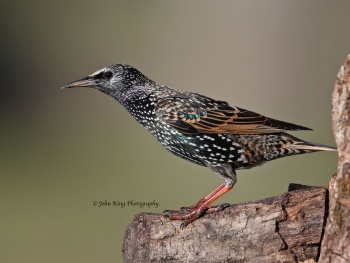 Spotless Starling in southwest Europe and northwest Africa is devoid of spots, but there are structural differences in the throat feathers (long and slender in Spotless, short in Common). Spotless Starlings are always blacker than Common Starlings, including the juveniles. 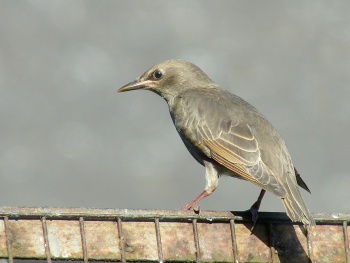 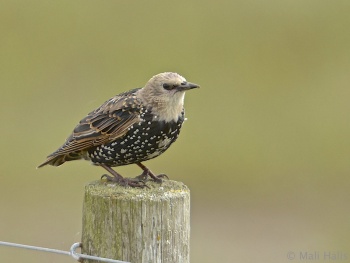 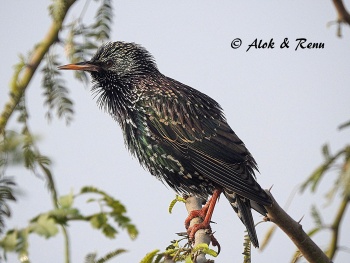 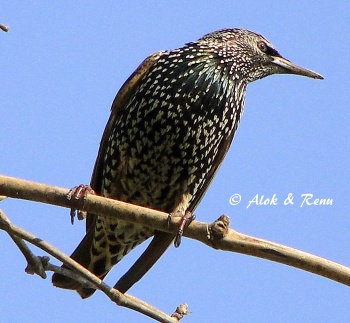 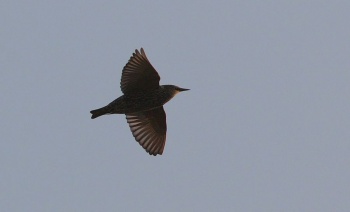 Varied. Can be found in any reasonably open environment from farmland to salt marsh. 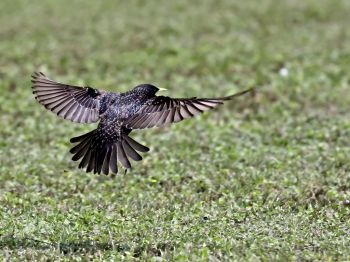 Plumage viewed from behind in flight
Photo © by Stanley Jones
Bell County, Texas, USA, 14 May 2021

Very gregarious out of the breeding season.

Starlings walk rather than hop. Their flight is quite strong and direct; they look triangular-winged and short-tailed in flight.

Nests in thatches, nest boxes, tree holes. An untidy feather-lined nest is constructed from straw, grass or twigs. The clutch consists of 4-5 pale blue, glossy eggs with. They are incubated for around 2 weeks and fledge about 19-22 days later. Timing within an area is closely co-ordinated, with all pairs fledging their young within a day or at most two of each other and with very little variation from year to year; typically on 20 May in central Britain. The flood of juveniles all fledging simultaneously reduces the risks of predation for each individual. There is usually only one brood in the north of the species' range, but if the first clutch fails they will re-lay; second broods are common in the south of the range. Late and second brood young fledge much later and have a lower survival rate than first broods.

They mainly feed on insect larvae but are opportunist feeders and frequently visit bird tables. They also like autum berries.

Migratory in northern and eastern parts of range; tends to be resident in southern and western parts and in some urban regions.