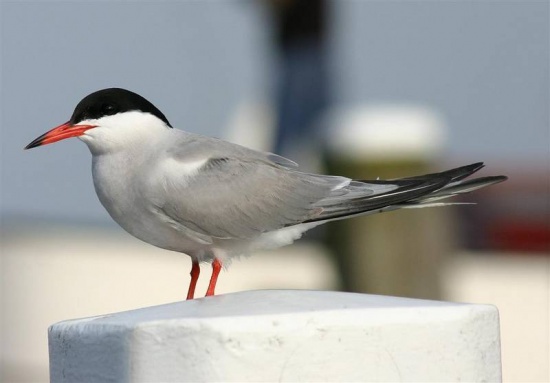 Common tern is on the left, Arctic on the right
Photo by Steve G

Most readily confused within its range with the similar Arctic Tern and Roseate Tern.

Both Arctic and Roseate Terns have wingtips that don't reach tail tip on standing bird (unless the tails streamers have broken off).
Roseate tern is paler with shorter wings.


On the ground the short legs of Arctic terns give them a somewhat huddled look whilst the tail feathers in summer birds extends well beyond the folded wings. Common stand taller and the tail feathers don't extend past the primaries.
On flying birds the wing of Arctic when seen against the light is really quite translucent whereas in Common only the inner primaries are translucent. Common Terns have a black wedge or notch effect on the upper outer 5/6 primaries which is absent in Arctic and the trailing black edge of the primaries is narrower and neater in Arctic.
I find the easiest way to separate them in Summer is by the fact that Arctics have a very buoyant bouncy flight and are more compact in the head and neck coupled with the long tail giving the impression that the wings are well-forward on the body whereas Common Terns seem to have their wings more to the centre of the bird. The real clincher however is the beak - Common Tern has a fairly long somewhat decurved orange-red beak with a clear black tip whilst Arctic terns have a shorter solid blood-red beak (and are more likely to draw blood when you invade the nesting colony!!) 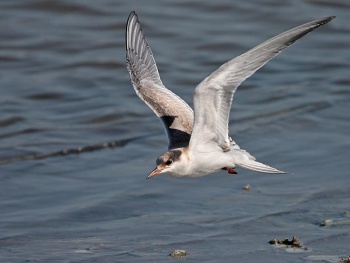 On real close ups, look for the color at the crescent under the eye: black in Arctic Tern, white in Common, creating different impressions on completeness of the mask.

This bird has a circumpolar distribution breeding in temperate and sub-arctic regions of Europe, Asia and east and central North America. It is strongly migratory, wintering in the subtropical and tropical oceans. It is sometimes known as the sea swallow.

A seabird of the tern family Sternidae.

This species breeds in colonies on coasts and islands and often inland on suitable freshwater lakes. This latter practice is assisted by the provision of floating "tern rafts" to give a safe breeding area.

Like all Sterna terns, the Common Tern feeds by plunge-diving for fish, from either the sea or freshwater lakes and large rivers. It usually dives directly, and not from the "stepped-hover" favoured by Arctic Tern. The offering of fish by the male to the female is part of the courtship display. Common Terns are known to reach an age of 23 years or more on occasion.

Lays two to four eggs. Like many white terns, it is very defensive of its nest and young and will attack humans and other large predators, but unlike the more aggressive Arctic Tern rarely hits the intruder, usually swerving off at the last moment.

Search for photos of Common Tern in the gallery

Search for videos of Common Tern on BirdForum TV