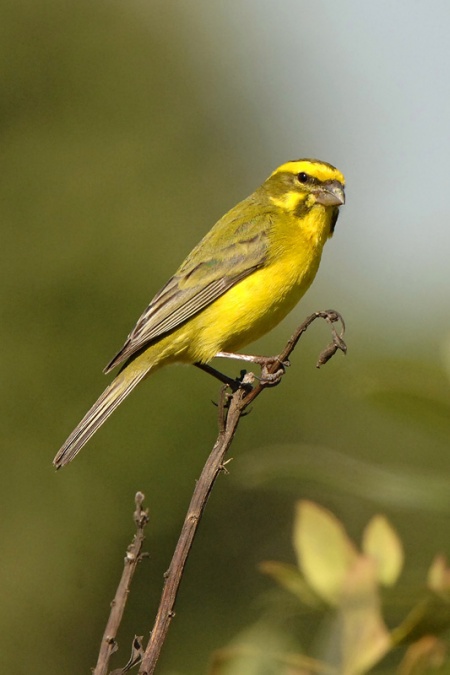 Length 13-14 cm, 13-21 g
Adult male (S. f. flaviventris): Forehead, eyebrows and cheeks yellow; crown, nape and mantle olive green with brown flecks. The eye-stripes, ear-coverts and sides of the neck are olive-khaki, and the malar stripes are olive-green. The back is olive-khaki and the rump and upper tail coverts greenish yellow. The tail and wings are dusky brown, feathers edged green or yellow. The underparts are a rich yellow; greenish yellow on the breast and greyish-yellow on the flanks. Bill horn with a pinkish base; eyes, legs and feet brown. The Yellow-fronted Canary has a more brightly contrasting yellow rump, duller yellow underparts, a white-tipped tail, and is smaller.
Brimstone Canary is larger with a heavier bill and green (not yellow) forehead; more green overall (but notice geographic variation in Yellow Canary with birds from the Cape area being greener). Brimstone Canary has a much shorter supercilium that quickly narrows behind the eye.
White-throated Canary is similar to the female Yellow Canary, but larger, has a heavier bill, is less streaked, and the yellow-green rump contrasts more with the greyish-brown back and mantle.

Introduced to the island of St. Helena and Ascension.

There are four subspecies:1,2

Conspicuous; in flocks when not breeding, sometimes with other granivores.

Forages on the ground and in forbs (an area of broad-leaved herbs, other than grass) and shrubs, eating flowers, seeds, nectar, insects and small crustaceans.

Monogamous and probably territorial. The nest is built by the female in as little as three days using a variety of plant material. Two to five eggs are laid and incubated for 12-16 days by the female.

Sings from the top of a bush or a tree, also does a display-flight. The song is a fairly long and varied series of warbled phrases and rapid muscial twitters, including "chissick" and "cheree" notes in random manner. Calls "peeoo", "peetyo" and "peelee", also an upslurred "peclyip" and a distinctive "chirrup" or "tirriyip"

Search for photos of Yellow Canary in the gallery

Search for videos of Yellow Canary on BirdForum TV