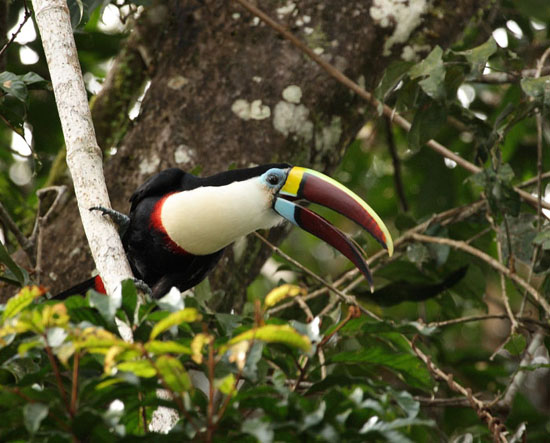 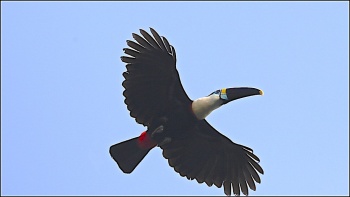 A large Toucan with a total length of 55-60 cm. (22-24 in).
Males are larger and longer-billed than females.
The belly, upperparts and tail are black, the throat and chest are white, the crissum and a relatively narrow chest-band are red
The uppertail coverts are yellow, the ocular skin is blue, the base of the bill is yellow and blue, and the culmen and bill-tip are yellow.

There are three subspecies (see Distribution & Taxonomy), which mainly differ in the colour of the bill:

The main section of the bill is reddish-brown.

The main section of the bill is black (no reddish-brown).

The main section of the bill is black, with some redddish-brown on the central part of the bill.

The Red-billed Toucan and the Inca Toucan are easily recognized by the diagnostic reddish-brown patches on the bill. Cuvier's Toucan is very similar to the Yellow-ridged Toucan, but can be recognize by its larger size, its proportionally longer bill, and its "flatter" (less keeled) culmen. Their voices also differ, with Cuvier's Toucan having a yelping voice similar to that of the Red-billed and the Inca Toucan, but unlike the croaking voice of the Yellow-ridged Toucan.

It is widespread in the Amazon region in South America, with R. t. tucanus in the north-eastern part of its range (East Venezuela, the Guianas and North East Brazil), R. t. cuvieri in the western and south-central Amazon (South West Venezuela, South East Colombia, East Ecuador, East Peru and West and Central Brazil), R. t. inca in northern Bolivia.

Previously, this species was split into two species, with R. tucanus being a monotypic species, and R. cuvieri including inca as a subspecies. However, they all interbreed freely wherever their ranges meet, leading to large areas populated by individuals showing some level of intermediacy between the "true" races. It is possible R. t. inca actually is a semi-stable hybrid population between R. t. tucanus and R. t. cuvieri.

Found in various forested habitats, mainly (but not exclusively) humid. Mainly in lowlands, but locally to an altitude of 1500 m (5000 ft). It is generally fairly common.

Largely seasonal, but exact timing differs between regions. The 2-3 eggs are placed in a tree cavity. Both sexes participate in incubating the eggs and feeding the chicks.

Search for photos of White-throated Toucan in the gallery