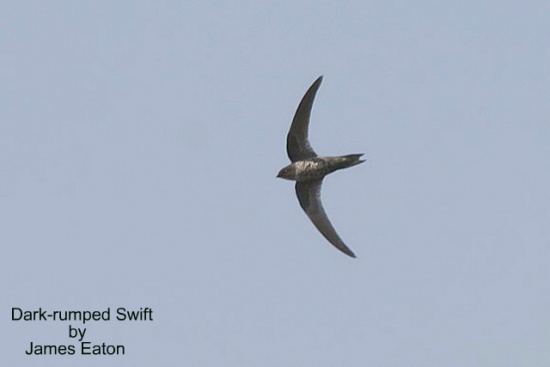 Length 17cm. This species is only little known and a positive identification in field is difficult.

The size is about the same as Common Swift, the structure similar to Pacific Swift.

Breeds very locally in NE India. Recent record from Bhutan and one record in Myanmar. Winters probably in N Thailand, but records from there may also represent an unknown breeding population.
Known breeding place around Lilancote and Cherrapunji in the Khasi Hills. Thought to also breed in Lushai Hills in Mizoram.
Restricted range species with a very small population. Vulnerable, but more study needed to get more information about range and population.

Forms a superspecies with Pacific Swift and was also considered to be a subspecies of it.

Regarded as monotypic, but birds from Thailand may represent a distinctive subspecies. Described subspecies rupchandi usually not accepted.

Found around cliffs and deep gullies. The Khasi and Lushai Hills are in a very wet zone with over 11m of precipitation per year.

No information about food and feeding or behaviour.

Breeds colonially in spring from February to May on ledges and fissures in cliffs. Builds a cup-like nest, using grass and feathers which are agglutinated with saliva. Lays 2-3, sometimes 4 eggs.
The records in Thailand suggest migration, but further study needed.

Search for photos of Dark-rumped Swift in the gallery