This section is aimed at explaining the bird and biology specific vocabulary you are likely to meet in other threads in Birdforum.

Diffraction: structural colours that are produced by the light being reflected in different directions depending on colour or some being reflected while other colours of light is allowed to pass through the surface of a structure such as a feather. A feather producing colours due to diffraction does not contain any pigment and in low intensity, diffuse light will look black. Iridescence is very similar except that the colour produced changes with the angle to the light source.

Dihedral: wings held up in a V-shape on a bird in gliding flight. This is well known for e.g., harriers, nighthawks and nightjars, and Rock Pigeon but occurs in other birds as well.

Dimorphic: most often used in the expression "sexually dimorphic" which means that the two sexes differ in plumage or whatever other character might be discussed. For example in hummingbirds, males often have colourful areas while females are more cryptic, and males can have elongated ornamental tail feathers which female generally lack or have in reduced form.

Diurnal: about a bird that is active during daytime. The activity pattern a bird shows at one time of the year might not hold true at other times of the year; for example, old world warblers have diurnal feeding habits but many species migrate at night.

Eclipse plumage: the non-breeding plumage of male dabbling ducks that looks very similar to female plumage, with similar camouflage characteristics while they are flightless during moult in late summer. The eclipse plumage is replaced by the next breeding plumage before winter starts, so that the male duck can be attractive to the female before breeding season starts. A similar switch into a non-breeding plumage of brightly coloured birds are also known for other groups, including Sunbirds, Fairywrens, and Weavers. 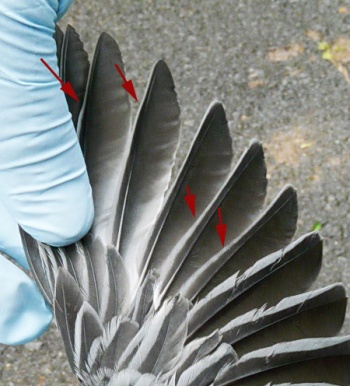 Part of the wing of a Red-legged Thrush. Each arrow points at a place where the feather has an emargination
Photo by njlarsen
Dominica

Emargination, emarginate, notch(ed): Most feathers get narrower towards the tip, but the narrowing is gradual. An emarginate feather has one vane getting narrower abruptly so that for example the inner half is about the same width and the outer half is narrower. Emarginate feathers are usually flight feathers and very often primaries. Emarginations have long been used when identifying small birds in the hand during ringing, but with high resolution photography, emarginations can become useful even for birds in the field.

Endemic (there are two usages of this term):

Established population: a population that is self-maintaining, not relying on input from the outside to maintain itself. This expression is most often used in the context of a feral population that only becomes "tickable" if it becomes established (no longer requires continued addition of birds through released or escaped individuals).

Eusynanthropic: about a species that is usually living in close proximity to humans. Synonymous with synanthropic, and opposite of exanthropic.

Extant: opposite of extinct.

Extinct: a species no longer found alive anywhere, or in a specified region. It is common practice to wait 50 years after last confirmed observation before declaring a species extinct, but sometimes less for conspicuous species where absence is easier to confirm. In some cases, a designation "extinct in the wild" is used when a captive population still exists; these can be the basis for a future reintroduction into the wild.

Extirpated (USA; not used in standard English): a species no longer found in an area/region where it used to live, but one that is still found elsewhere.

Eye-bows: the arch-shaped often pale feather-tracts which on owls run from side of forehead down in front of each eye and ending at gape[1].

Eye-ring: The ring of feathers, often a different colour than the surrounding feathers, around the eye, often broken by the eye stripe. A prime example is that shown by White-eye sp. (Zosterops sp.).

Exploded lek: A type of lek. Bird display where several males call and display simultaneously to attract females while far away from each other, but still within hearing distance. Lek is characterized by that the lekking place is used only for displaying and provides no food, nesting place or other resources.

Faecal sac (USA: fecal sac): a sac-like structure containing excrements of a nestling so that a parent can carry it away from the nest and thereby keep the nest clean. The excrements are covered in a gelatinous substance. Faecal sacs are mainly known from Passerines but also at least some woodpeckers have them. In a few examples, faecal sacs from very young nestlings are eaten by their parents, while the faecal sacs from older nestlings (same birds) are carried away[1].

First adult summer: This term does not indicate the age of a bird, it merely indicates that the bird is in its first adult summer plumage. In smaller birds, it is usually moulted into during the year after hatching (when the bird is in second CY), however with many large birds (for example gulls, eagles, albatrosses) this may be up to 3-5 years after hatching. Normally the bird moults into this plumage from first winter plumage. Also known as first breeding plumage, first alternate plumage, or first nuptial plumage. Some species are able to (or at least can attempt to) breed before they reach the full adult plumage.

First summer (there are two usages of this term):

First adult winter: Not indicative of the bird's age but rather bird's first full set of adult winter feathers, usually reached during the year of hatching although with some birds it may be up to 2 -3 years before the bird moults into this plumage. This plumage is reached after moulting from juvenile plumage (but see remarks under First Winter, usage 2, below). Also known as first non-breeding plumage or first basic plumage

First winter (there are two usages of this term):

Frugivorous: used about a bird (or other animal) that eats fruit, either exclusively or as a significant part of its diet.

Fynbos: a word used to describe areas in the Western Cape region of South Africa with a very diverse shrub flora dominated by plants in the family Proteaceae. This is found on nutrient-poor soil in both lowland and especially mountain areas with winter rains in this region. Relatively few birds are found in fynbos but the level of endemism among these is high. True fynbos specialists are especially found in the higher elevation, while lowland fynbos used to share birds with areas that are more nutrient rich but drier (renosterveld) but which today have largely been converted to agriculture. References[2, 3]