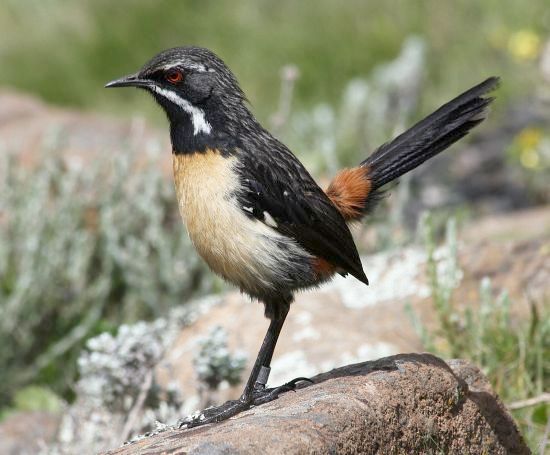 Length 21-22 cm.
Adult male: The crown and back are grey with black streaks and the wings are black with white markings. The rump is orange rufous and the fairly long tail is black with a white tip. The face is black, contrasting with conspicuous white eyebrows and malar stripes. The throat and upperbreast are black, and the lower breast and belly light orange-rufous.
Adult female: Similar to the male, but paler below with a buffy white throat.
Immature: Similar to the adult female, but with a shorter tail. 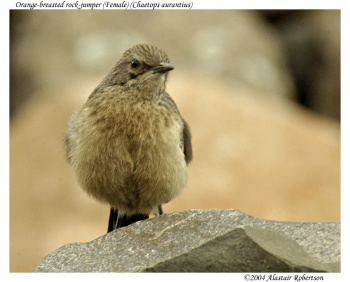 Mountains (altitude >1000 m) of Lesotho and the Eastern Cape and KwaZulu-Natal provinces of South Africa.

It has been considered conspecific with Cape Rockjumper.

This genus was traditionally placed with the Thrushes or the Babblers (Timaliidae), but is now considered to be more closely related to the rockfowl (genus Picathartes), and is placed in the monogeneric family Chaetopidae. Molecular evidence indicates that this family diverged from the main Passerine tree about 45 million years ago, before the divergence of the Passerida (into the superfamilies Muscicapoidea, Sylvioidea and Passeroidea).

Forages for invertebrates on the ground or from perches on rocks.

The nest is a bowl of grass and sticks on the ground and well hidden under vegetation against a rock. One to three eggs are laid October to December.

Search for photos of Drakensberg Rockjumper in the BirdForum Gallery