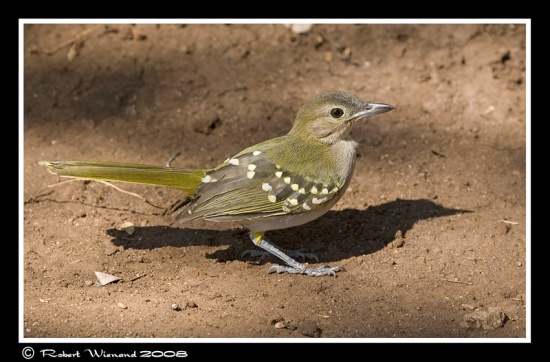 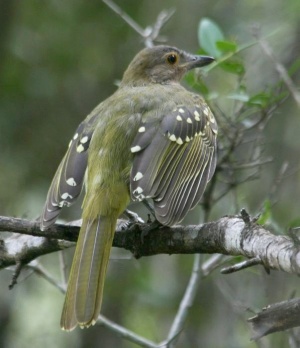 There remains some argument about the grouping of the Nicator genus with some authorities (Clements, 2007) placing it with the Bulbuls (Pycnonotidae) whereas others group it with the Bush-shrikes (Malaconotidae). Beresford et al. (2005) found that molecular evidence shows that Nicator is not closely related to either group, and they suggest that the three species are best placed in their own family.

Despite being fairly common it is secretive and shy, foraging in densely tangled undergrowth or lower branches.

Food is mainly insects taken in the canopy, in low vegetation and on the ground. Like the Fork-tailed Drongo, it will follow large mammals, feeding on flushed insects; also known to glean ticks from Warthog, Nyala, Impala, Zebra and Red Duiker.

Monogamous and territorial. The nest is a platform of stalks, tendrils and twigs with a shallow cup; it is not woven like the nest of a Bulbul. It is usually well-concealed, and about one metre above the ground. Two to three eggs are laid November to January.

It is highly vocal, singing from concealed perches; it is a species which frequently mimics other forest species.

Search for photos of Eastern Nicator in the gallery