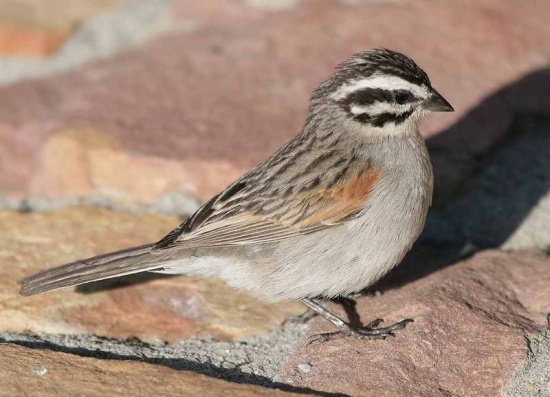 16cm long, mass is 17-27 g
Adult has a black crown, white supercilium and black-bordered white ear coverts. The upper parts are grey brown with some dark streaks, and the wing coverts are chestnut. The tail is darker chestnut, and the underparts are grey with a pale throat.
The sexes are similar, but females may have a buff tone to the white head markings.
Young birds have duller chestnut wings, a less distinct head pattern, and heavier streaking extending on to the breast and flanks.

There are 10 or 11 subspecies; variation is mainly in the coloration of the back, mantle and under parts.

Vincent's Bunting was formerly considered a subspecies of this species.

Rocky slopes and dry weedy scrub, mainly in mountains in the north of its range.

The Cape Bunting is not gregarious, and is normally seen alone, in pairs or family groups.

It feeds on the ground on seeds, insects and spiders.

Its lined cup nest is built low in a shrub or tussock. The 2-4 eggs are cream and marked with red-brown and lilac.

Search for photos of Cape Bunting in the gallery