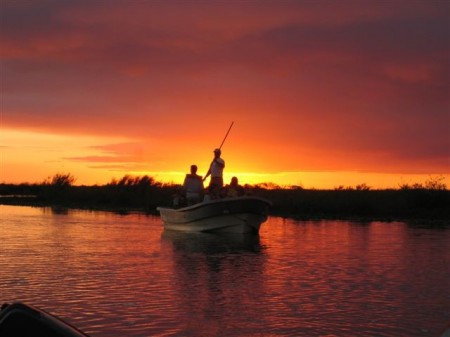 In the heart of Corrientes province and 1000 kilometres north of Buenos Aires you will find Esteros del Ibera, the great marshlands of Argentina (also called the Pantanal of Argentina). The nature reserve, founded in the year 1983, covers over 13,000 km2 of marshes, lakes and islands.

In the year 2002 Esteros del Ibera was put on the list of reserves of fresh water systems by the Ramsar convention, especially because of the area's unique biodiversity and the multitude of endangered plants, birds and wildlife. Over 350 species of birds can be found in the Ibera.

The intact environment is home and paradise to over 350 species of birds, Caimans, Capybara, Marsh Deer, Otter, Maned Wolf, Wild Cat, Howling Monkey, Skunk, Anaconda, Turtle, Piranha and many other animals. It's definitely a must for any ornithologist visiting Argentina.

Nature Reserve since 1983, under provincial protection

Ibera Wetlands and Aguapey River. An auto trip along highway 12, which constitutes the northern boundary of the reserve, will result in views of thousands of large marsh birds, such as storks and herons, as well as birds of prey. This road leads to the Chaco National Park, another outstanding birding area. This means that Ibera, Iguazu Falls National Park, and Chaco NP are all within a reasonable drive of each other; a week tour could take in all, although more time is recommended.

The park can be accessed by car or bus in two ways:

It is a toss-up which of these approaches is worse. A standard passenger car can handle either road in dry conditions, but the NW approach should not be attempted in the wet! Some sections of that road have been significantly improved, leading to the expectation that the dust/mud problem will be solved in the future.

The Visitor's Center is quite modern and staffed with helpful people. English is spoken by a few of the staff.

The tiny village of Carlos Pellegrini just across the bridge from the Reserve has some hostelerias, family-owned restaurants, and even a couple of sources of (very basic and very few) groceries. If staying at the campground, which is new and well equipped, you'll want to bring your food and supplies with you, especially if you've arrived by bus from Mercedes. It is a long walk to some parts of the town, which is laid out on a large grid even though the building density is slight. The campground is located right on the water, and offers about 20 sites with parking spots, shade pavillions, parillas (grills), and tables. There is a small fee for camping, on a per-person basis. Birding is quite good in the campground, and caymans are in the water just feet away. From either the campground or accomodations in town, it is about 2 km across the bridge to the Reserve, so a car is quite useful

Located only 500 km from the Iguazu National Park at the border to Brazil you can also combine your stay with the visit of this subtropical area that offers its slightly different beauties.

By mocosita:
Simply the best place for birding all over Argentina.

By ibera:
I have been 5 times already and I each time I get more in love with this place. About transport you can take a bus from Buenos Aires to Mercedes and there you can get transport to Colonia Pellegrini where the Ibera Lagoon is.
Pros: