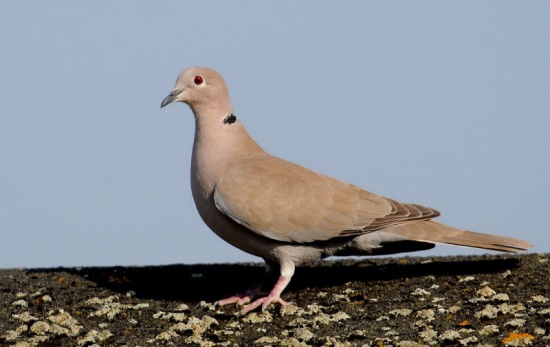 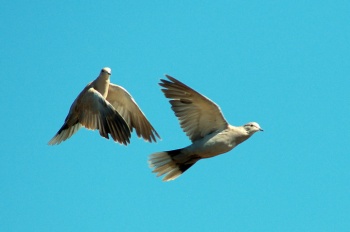 Length 30–32 cm (11¾-12½ in), wingspan 48-53 cm, weight 125-196 g.
A medium-sized, pale dove with a distinctive black collar around the back of the neck only - does not extend to the chin. The collar is often outlined with a thin white ring on both sides. Dark red eye surrounded by whitish eye ring, grey bill, dark primaries, and a long tail tipped in white.

Outside of Streptopelia and in North America, the most similar species is Mourning Dove, but Eurasian Collared Dove is lighter in colour and tail is squared off rather than pointed.

A pale buff variety has been noted in Europe, Guadalupe, Florida and California.

Originally native to just southern Asia and the extreme south-east of Europe (European Turkey), it expanded rapidly to the north-west through the 1900s, reaching Bulgaria in the 1920s, Germany by 1946, Britain by 1955, and Ireland by 1963; it then spread a little more slowly north-east and south-west from this first push, reaching Finland around 1970, Spain by about 1980, and Morocco by around 2000. It also reached the Faroe Islands, where it clings on in very small numbers, and Iceland, where it failed to establish and remains a casual vagrant which has only bred on a very few occasions. There has also been some spread at the opposite end of the range, increasing in eastern China and Korea, and reaching southern Japan.

Some recent decline in numbers has been noted in Britain, possibly due to competition from increasing numbers of Common Wood Pigeon and/or improved hygiene (less wasted grain) around farms.

It was introduced accidentally into the Americas in the Bahamas in 1974, soon made its way to Florida, and has been rapidly spreading across North America ever since. Published distribution maps can be considered obsolete very quickly; the species is now established well into the far western states, British Columbia, and the Great Lakes. 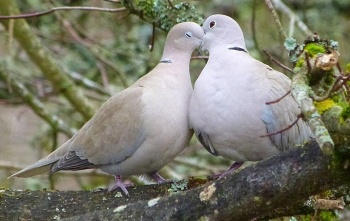 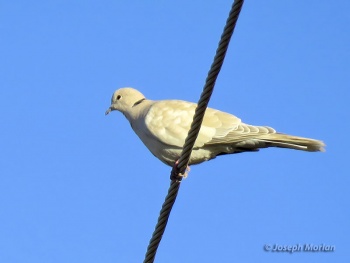 Forages on the ground, but frequently flies to perches in trees. Skilled and fast flyer.

Their diet consists of a variety of vegetable matter, including seeds, grain, fruits and grass.

A twiggy platform nest in a dense bush or tree, more rarely in or on a building. The clutch consists of 2 glossy white eggs which are incubated for 16 to 17 days, fledging around 19 days later. There can be up to five broods per annum, though breeding success per brood is usually fairly low. Eggs may be laid at any time of the year in warmer regions, but mainly March to October in climates with colder winters.

Ringing evidence in Europe during the main expansion phase showed a tendency for young birds to disperse north-westward; this effect has declined more recently as populations increased and stabilised.

Long call given by one individual from a perch, during summer, heard in the file below:

Search for photos of Eurasian Collared Dove in the gallery