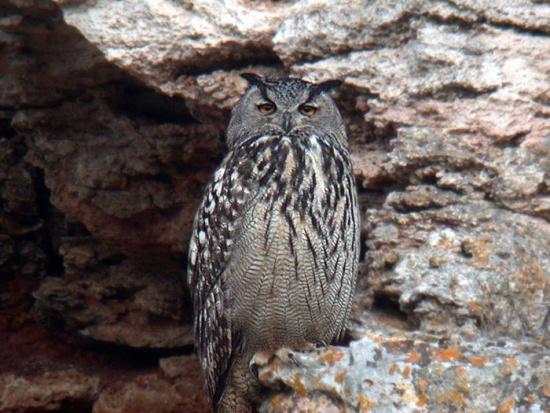 Largest European Owl at 65-70cm (a little larger than Common Buzzard).
Adults: brown upperparts with blark markings including both streaks and bars in a somewhat irregular pattern. Underparts are clearly paler than upperparts, but have black streaks mainly on breast while belly has pattern of black feather shafts and cross-bars. Large, orange eyes appear in a facial disk that is greyish-brown to buff, bordered dark but with somewhat inconspicuous border. Eye-bows are pale stretching from above the eye to below the eye and running between the eye and the bill. The overall effect can be quite fierce-looking. Prominent wide ear tufts varying between pointed sideways or up and only disappearing in flight. Bill and claws black. Legs are fully feathered. Bright patch on outer wing visible in flight.

Basic color differs quite a lot through the huge range, from tawny to blackish to buff on upperside and to almost whitish or greyish-brown on underside. The extent of dark streaks on both upperside and underside is also variable. 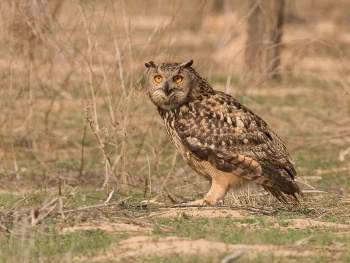 Pharaoh Eagle-Owl is smaller and paler than even the nearest populations of Eurasian Eagle Owl; there is an overlap in range in the middle east (subspecies interpositus). Also check especially Long-eared Owl among smaller species.

Europe through much of Asia
Europe: resident from Scandinavia to the Balkans, Austria, Switzerland, Italy, south of France, Spain, and Portugal. Spot-wise distribution in the rest of Europe, partly from released or escaped individuals including in Belgium, the British Isles, Germany, and Denmark. Vagrant individuals do occur outside of breeding range.
North Africa: probably extinct from its former range in Morocco and Algeria.
Asia: absent from the northern areas lacking forest but other wise to north-east Asia, to southern China, northern India, the Himalayas and the Middle East. Local in northernmost Japan. 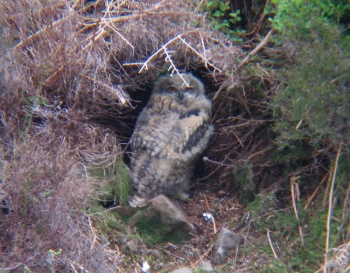 Subspecies B. b. interpositus has been proposed for elevation to status as full species[4]. 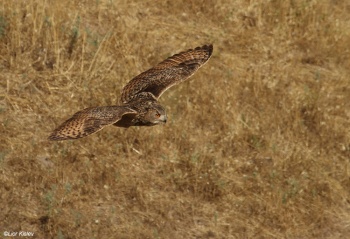 Mountains and forests with cliffs and rocky areas.

It hunts a large variety of prey including mammals from voles and rats to hares, bird or varying sizes up to herons, buzzard and Capercaillie, reptiles, and even larger insects and earthworms. Often will prey on smaller owls occurring in the area.

Search for photos of Eurasian Eagle-Owl in the gallery