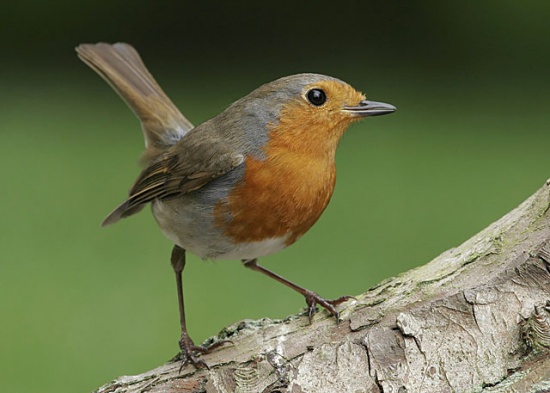 12.5 – 14.0 cm (5-5½ in)
Thin brown bill
Brown legs
Adult: Olive-brown above, orange-red face, throat and breast. Bluish-grey flanks and whitish belly.
Juvenile: speckled brown all over, it will be two to three months from fledging, before reddish feathers begin to appear under the chin. 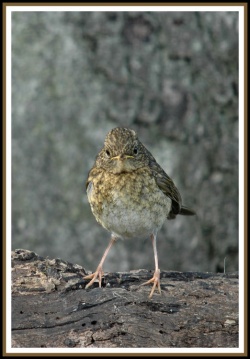 Widespread in Europe from western Siberia, south to Algeria and as far as the Azores and Madeira. In the south east, it reaches the Caucasus range.
British Robins are largely resident but a small minority, usually female, migrate to southern Europe during winter and a few of these migrate as far as Spain.

The females move a short distance from the summer nesting territory to a nearby territory that is more suitable for winter feeding. Males keep the same territory throughout the year.

Scandinavian and Russian Robins migrate to Britain and western Europe to escape the harsher winters. These migrants can be recognised by the greyer tone of the upper parts of their bodies and duller orange breast.

Formerly classed as a member of the thrush family, but is now considered to belong to the Old World flycatchers (Muscicapidae). European Robins and similar small European species are often called chats.

The only species in the genus Erithacus, but formerly considered congeneric with Japanese Robin and Ryukyu Robin, these now moved to the genus Larvivora. It was previously thought to be closely related to these, and to other European and Asian nightingales and robins in the genera Luscinia and Tarsiger, but recent genetic data has shown it is not closely related to these, nor to any other European or Asian birds, instead being in a group of tropical African robins in the genera Cossypha, Cossyphicula, Pogonocichla, Pseudalethe, Sheppardia, Stiphrornis, and Swynnertonia[1]. 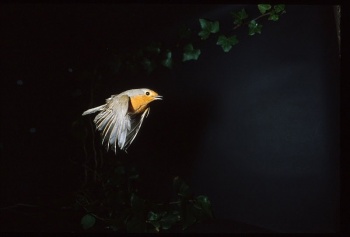 The central Canary Island subspecies E. rubecula superbus has been proposed for a split under the name of Tenerife Robin or maybe even Superb Robin; so far this split does not seem to be supported by any major authority.

Woodland of various kinds, usually deciduous or mixed but purely coniferous in some areas. Found in lower branches of trees and in bushes and shrubs, usually feeding on the ground. Common in parks and gardens, especially in Britain, also hedgerows and road verges but avoids most open spaces, except maybe on migration. May enter buildings in very harsh weather.

Male Robins are highly territorial, and very aggressive for their size.

Very confiding and will approach close to man, certainly in the British Isles; Continental birds appear to be more wary. Robins will also approach large wild animals that disturb the ground, to look for any food that might be brought to the surface.

They have a varied diet, which includes seeds and insects. They readily visit bird tables.

Flight is rather 'flitting'. Flicks wings and tail when perched. Hops on ground.

A tidy nest-cup is constructed in crevices, holes or artificial sites such as discarded kettles.

Song: flutey and thin, warbling song in the breeding season, often singing after dark, leading to confusion with Common Nightingale. Both sexes sing during the winter, when they hold separate territories, the song then rather more plaintive than the summer version. Will sing all the year.
Call: includes "tic", "tsip", and plaintive "tsee".

The red breast patch led to its original name of "redbreast". In the middle ages it was usual to give human names to familiar species, the bird came to be known as Robin redbreast, which was eventually shortened to robin.

Folklore tells us that the Robin obtained his red breast because blood dripped onto him when removing a thorn from the head of Jesus.

Search for photos of European Robin in the gallery