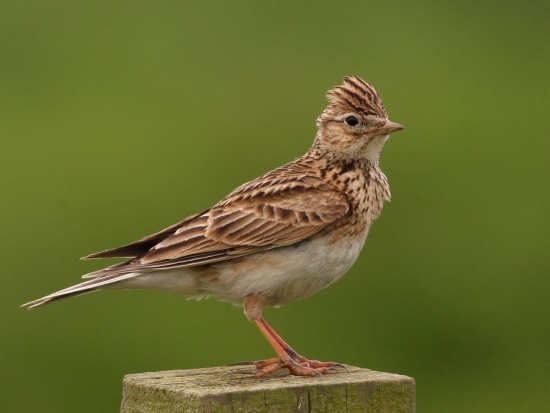 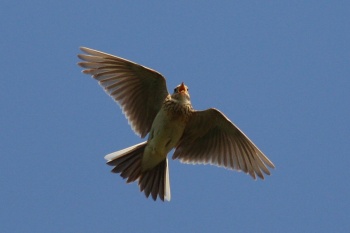 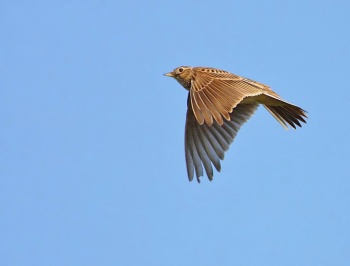 Similar to Oriental Skylark but can be distinguished by larger size, thicker bill, longer tail, white trailing edge to wings and whiter outer tail feathers. The primary projection is longer. Call is different.

Distinguished from Japanese Skylark by lack of rufous shoulder.

Breeds across most of Europe and Asia and in the mountains of North Africa. It is mainly resident in the west of its range, but eastern populations are more migratory, moving further south in winter. Even in the milder west of its range, many birds move to lowlands and the coast in winter. Asian birds appear as vagrants in Alaska; this bird has been introduced to Hawaii and British Columbia, Canada. 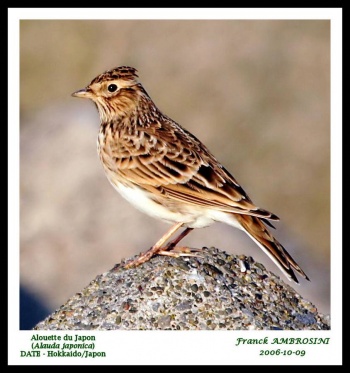 There are 13 subspecies[1]:
European Group

The diet includes seeds and insects.

The 3-5 eggs are a dirty white colour and heavily marked with dark brown spots and blotches. They are incubated for 11-12 days; the young fledge 9-10 days later. There can be 2 or even 3 broods. The nest is well hidden in the grass.

Song: is delivered from high in the sky.

Search for photos of Eurasian Skylark in the gallery