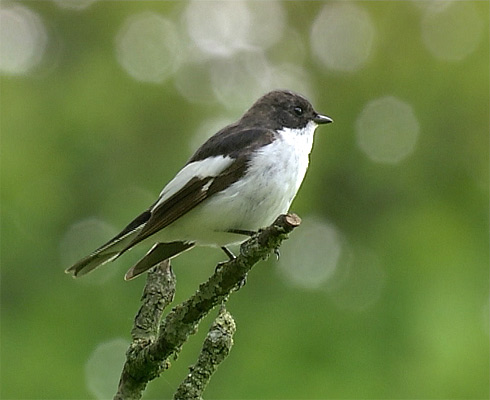 Male
Photo by Rob
Vaasse, The Netherlands, May 2003 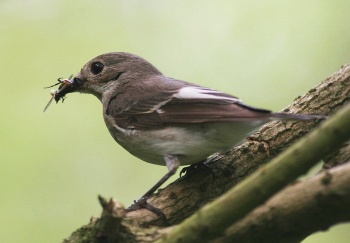 The most widespread and numerous of the three "pied" flycatchers of the Region. Breeds throughout most of Scandinavia and in mainland Europe from the Netherlands, Belgium and eastern France east to the Urals. Also breeds in parts of north and west Britain, at scattered sites in central and southern France, in central Iberia and in North-West Africa.

Migratory, leaving breeding areas in mid August-September to winter in West Africa and returns in mid April-June. Passage birds occur throughout most of Europe, the Middle East and North Africa. Occasional winter records from around the Mediterranean.

Atlas Flycatcher has formerly been considered a subspecies of this species.

Preferred habitat is mature deciduous woodland, especially oak, but also found in mixed and coniferous woodland in upland areas in south of range. Occurs in orchards and parks, sometimes large gardens and often in areas of scrub on passage.

They nest in a tree hole; 4-10 eggs are laid. They readily take to nest boxes.

The diet includes insects which are aerially hawked.

Search for photos of European Pied Flycatcher in the BirdForum Gallery

Search for videos of European Pied Flycatcher on BirdForum TV