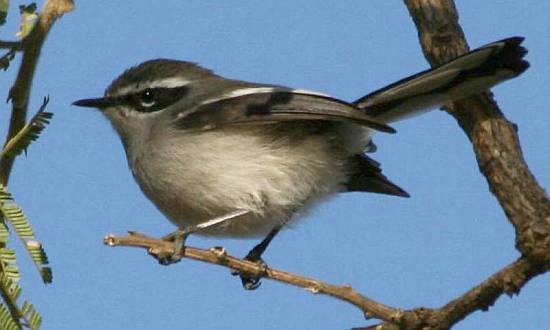 Lesotho and much of South Africa, other than the moist south and east coast. Breeds in summer in the south of its South African range and Lesotho. A winter migrant to northern and north-eastern South Africa, southern Botswana, and rarely Namibia and Zimbabwe.

The only species in the genus. Most similar to the Elminia species of Africa, and the Culicicapa species of Asia.

Breeds in fynbos, scrub and on bushy hillsides. Overwinters in thornveld, scrubby hillsides, plantations and gardens.

Usually found singly. Highly active, constanly moves through the foliage of trees and shrubs, usually within 7 m of the ground. Forages for arthropods.

Search for photos of Fairy Flycatcher in the BirdForum Gallery