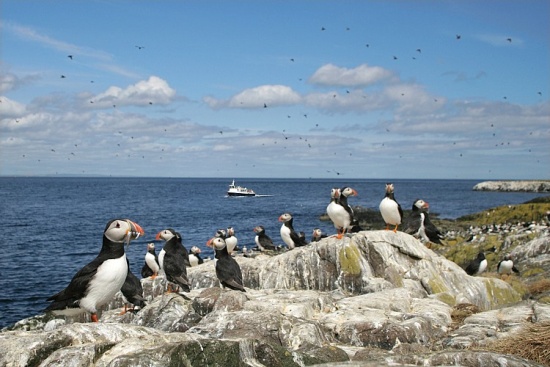 Photo by nigelblake
Atlantic Puffins on the Farnes

Lying off the north-east coast of England, the Farne Islands form a National Nature Reserve owned by the National Trust, famous for breeding seabirds and terns in particular. There are ten larger islands and numerous smaller reefs and rocks. Vegetation is sparse on some islands, others have thick grass with Silverweed, Brambles and Thrift.

Breeding species usually number a little over twenty but a much wider range occurs on passage with more than 150 species recorded annually.

Common Tern, Arctic Tern, Sandwich Tern all breed as well as Common Eider, Oystercatcher and Ringed Plover. Common Shelduck is rather an irregular breeder. Roseate Terns used to breed regularly and are still seen in good numbers in August on post-breeding dispersal from the colony on Coquet Island.

On the cliffs there are Northern Fulmar, Great Cormorant and Shag, Atlantic Puffin, Common Guillemot and Razorbill and there are breeding Kittiwake, Black-headed Gull, Lesser Black-backed Gull and Herring Gull. Great Black-backed Gull and Common Gull can also be seen in summer and both have bred on the Farnes. Little Auks occur in winter in very variable numbers, including the UK record count of 28,803 on 11 November 2007. Small numbers of Black Guillemot are also present in winter. Common Wren is a permanent resident on the islands as is Rock Pipit, while Barn Swallow is a summer visitor.

Offshore during spring and autumn divers, shearwaters, skuas and scoter are regularly seen. On the islands around 250 Purple Sandpipers winter regularly (the largest wintering population in England), while Whimbrel, Ruddy Turnstone, and Red Knot pass through, sometimes harried by transient Merlins or Peregrine Falcons.

Passerine migrants include chats, flycatchers and warblers, finches and thrushes. Bluethroat is a fairly regular migrant. Common Teal and Mallard often visit the pool on Brownsman.

The most famous rarity to be seen on the Farnes was "Elsie", a Lesser Crested Tern which first appeared in 1984 and subsequently returned every summer until 1997, sometimes pairing with a Sandwich Tern. Sooty Tern has also been recorded as well as the only Western Palearctic record of the North Pacific Aleutian Tern, on 28-29 May 1979. More recently, a Bridled Tern summered in 2013 and 2014. The eight records of Fea's Petrel noted on migration in recent years make the Farnes one of the best sites in Britain to record this species.

The Farnes are an important breeding area for Grey Seal, with over 1,500 pups born annually.

St. Cuthbert lived and died on the Farne Islands in the 7th century; he introduced laws in 676 to protect the nesting seabirds on the Farnes, the earliest known bird protection measures in Britain, and possibly the world. Now these rocky islands are famous as a seabird sanctuary, owned by the National Trust.

FernCurl's review A fantastic place. I could not believe there had been no other reviews. You only usually land on the main island (and pay on landing) but super bird variety as listed. Beware the attacking terns in the main area near the shop and chapel in the breeding season. I have a photo from one of the main cliff top viewing areas showing (at various levels): puffins, pair of shags in beautiful green plumage; kittiwake; razorbill and guillemot - in just one small area. Most boat trips take you around the inner and outer Farnes sailing through rafts of puffins, past the seals (loads of them). An unforgettable trip. Most boats go from Seahouses and if you are a poor sailor go for a bigger one as it can get quite choppy and splashy between islands.