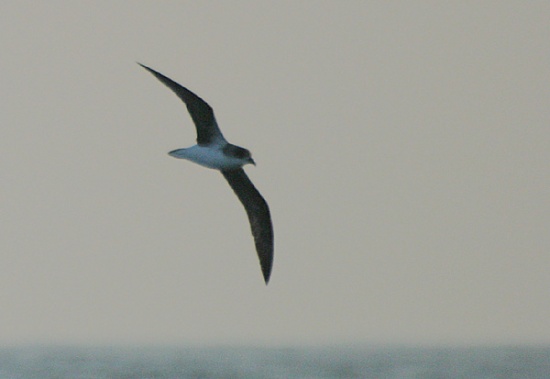 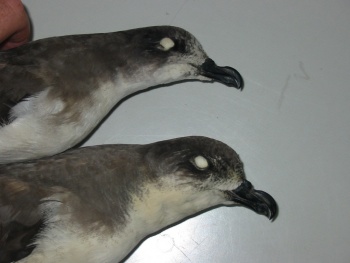 Zino's Petrel above; Fea's Petrel below
Photo by tomjenner
Specimen from the British Museum, Tring

It shares the remarkable flight mode with swing-wing (not flapping) action, and frequent 'looping the loop', of other Pterodroma petrels. It is most similar to Zino's Petrel which is marginally smaller and has a less heavy bill, and Soft-plumaged Petrel which differs in having a darker head and complete grey band across the upper breast.

Can be slightly reminiscent of Great Shearwater or maybe a large Manx Shearwater, but their underwings are not dark, and are immediately distinguishable by their typical shearwater flight mode.

Breeds in the Cape Verde Islands, and Bugio Island in the Desertas Islands near Madeira. At sea, it ranges across much of the temperate northern Atlantic Ocean, most often seen on deep-water upwelling areas on the continental slopes off eastern North America and western Europe, but also nearly annually into the northwestern North Sea.

Previously considered a subspecies of the Soft-plumaged Petrel P. mollis.

Highly pelagic, only coming to land on remote oceanic islands to breed.

Colonial nester, using either abandoned rabbit burrows, ones that it has excavates itself or in holes in rocks. A single white egg is laid. The nest is visited at night.

The diet includes planktonic food items from the ocean surface.

Search for photos of Fea's Petrel in the gallery