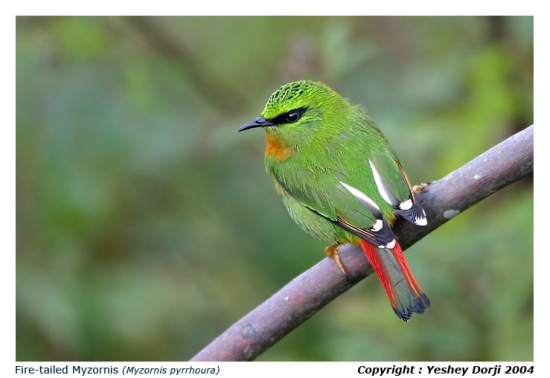 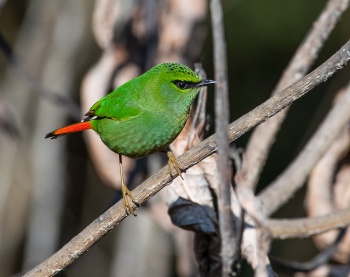 Females have duller red parts and are often bluer than males.
Juveniles not described.

Central and Eastern Himalayas, eastern Assam (India), western Yunnan (China), north and north-eastern Myanmar.
Prefers alpine biotopes from 1600-3600 m. asl., where it has a predilection for juniper, rhododendron and bamboo thickets on sunny hillsides. Localized distribution and travels in small groups (3-4) or with other small babblers.
Scarce and uncommon in most of its range. Most regulary reported in Bhutan and Eaglenest Wildlife Sanctuary in Arunachal Pradesh.

The only member of this monotypic genus.

The exact taxonomic position of this bird has not been as yet determined. Loosely collocated within Sylviidae, and certainly either in Timaliidae (Babblers) or closely related. Now placed in Paradoxornithidae by Clements.

Capable of sustained stationary hovering flight much like sunbirds, can also be seen running up moss-covered tree trunks like a creeper.

Breeding season from April to June, in Bhutan maybe to September. Nest a globular structure made of moss and placed 1 to 6 m above the ground in moss, on a rock face or in a trunk with moss and lichen.

Resident species with some altitudinal movement.

Search for photos of Fire-tailed Myzornis in the BirdForum Gallery