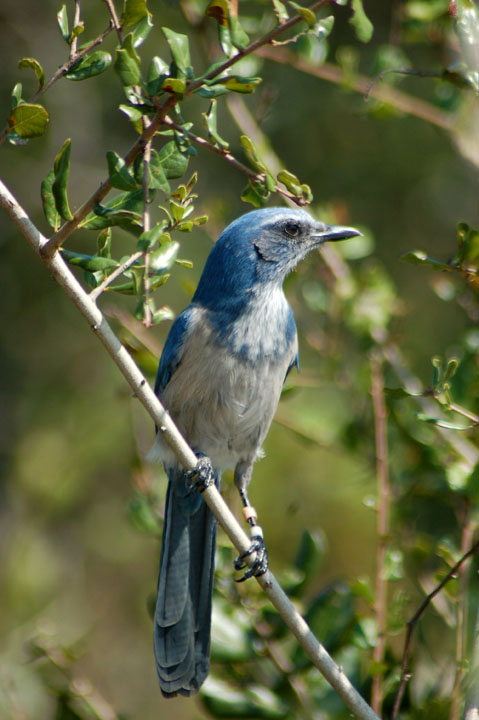 This jay shows only shades of light gray and blue:

Mid to south parts of the Florida peninsula (more to the Atlantic than the Gulf side) where it is common but localized.

This is a monotypic species.
Has been considered conspecific with Island Scrub Jay, California Scrub Jay and Woodhouse's Scrub Jay in the past.

Scrublands, especially with scrub oaks rather than pines.

An inquisitive and intelligent species, the most striking attribute of the Florida Scrub Jay's behavior is its remarkable tameness. Scrub Jays show almost no fear of people and will even take peanuts from people's hands and lips. Scrub Jays will also steal silverware and other shiny objects in a manner similar to the American Crow.

Breeding seaons from March to June. Pairs stay together several years in their territory. Helpers usually involved (yearling males or femals from previous breeding season). The bulky nest is made of twigs and placed around 1m above the ground on the main stem of a scrub oak. Lays 1 - 4 eggs.

Search for photos of Florida Scrub Jay in the gallery

Search for videos of Florida Scrub Jay on BirdForum TV