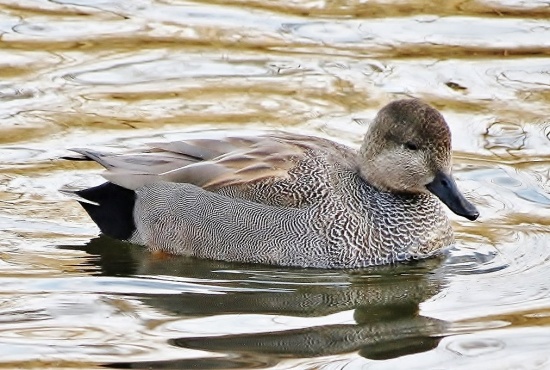 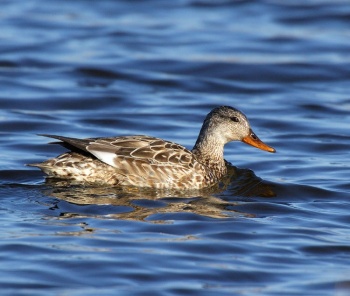 Female is easily confused with the slightly larger female Mallard. Look for white patch on hindwing and orange edges to the bill.

Breeding range very patchy and discontinuous in most of Europe. Scattered pockets in Iceland, the British Isles and in most Continental countries from western France to Russia where it becomes more widespread and the range is more continuous. Absent from Scandinavia, except a small part of east Sweden, and from much of the Mediterranean region but small numbers breed in Morocco and Iberia, Italy, the Balkans and Turkey. Some populations, as in Britain, are descended from introduced stock. Recently bred for the first time in the Channel Islands. Breeds widely across temperate Asia to northern China and may breed on Hokkaido. In North America breeds in central and southern Alaska, western and south-central Canada and the north-central and western USA south to California and Texas.

Resident in much of western European range, except Icelandic birds which winter in Britain, but from central Europe to Asia mainly a summer visitor. In winter becomes more widespread in Britain, western Europe and around the Mediterranean.

Winters in small numbers in North Africa, notably in Tunisia and in the Nile Valley, rarely south of the Sahara. North American birds winter throughout southern half of USA and south to Guatemala. 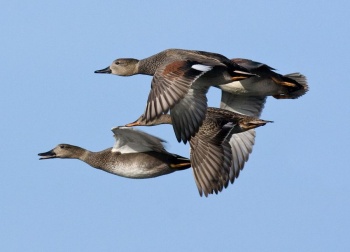 Formerly placed in the genus Anas.

Their vegetarian diet consists of the seeds, leaves, roots and the stems of aquatic plants.

Search for photos of Gadwall in the gallery

Search the Gallery for videos

Search for photos of Gadwall in the gallery