42 -46 cm (16½-18 in) and up to 375 g (female) this is an impressively large Kingfisher.
It has a large crest and finely spotted white on black upperparts.
The male has a chestnut breast band and otherwise white underparts with dark flank barring, while the female has a white-spotted black breast band and chestnut belly. 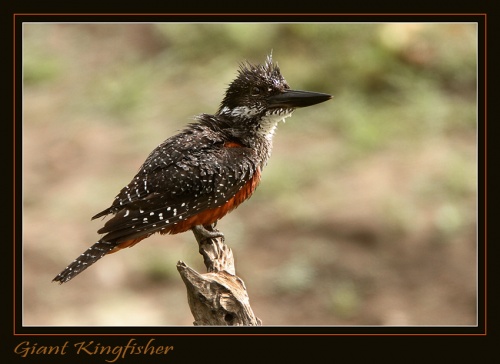 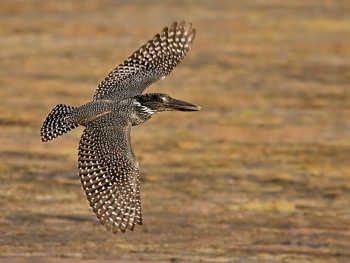 Almost any water body with sufficient food and overhanging branches, from which to hunt, including streams, rivers, estuaries, seashores and sewage ponds. Common along water furrows in villages in the South Karoo and at irrigation schemes.

It is shy and unobtrusive and therefore can be difficult to see.

The diet consists of crabs, fish, and frogs. They dive from a perch, often immersing completely. The prey is then taken to the perch and vigorously beaten against solid object until dead.

Monogamous, solitary nester. Breeding is from August to January in a hole excavated into sandbanks. Three to five oval, white and glossy eggs are laid into these riverbank tunnels.

The call is a loud wak wak wak.

Search for photos of Giant Kingfisher in the BirdForum Gallery

Search for videos of Giant Kingfisher on BirdForum TV