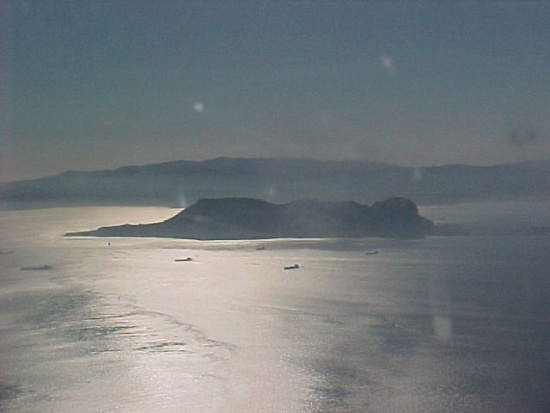 The Eastern Side of Gibraltar
Photo by Ernest Garcia

The famous Rock of Gibraltar is a limestone promontory, some five km long and one km wide. The summit ridge, rising to 426m, offers superb if vertiginous views over the westernmost Mediterranean, the Costa del Sol and, especially, the Strait of Gibraltar itself. The Moroccan shore is only 20 km away and views often extend to the Rif Mountains beyond.

The Rock of Gibraltar rises to more than 420 m with sheer cliffs on the north and east and gentler slopes on the western sides. Much of the area is covered with dense maquis and garigue consisting of many species of berry-bearing plants that provide food for the large numbers of passerine migrants. This dense cover is interspersed with open grassy areas where more open-country birds can be seen.

Although the lower parts of the Rock are now largely developed, the whole of the Upper Rock is now a nature reserve.

The strategic position of Gibraltar is the root of its ornithological fame. Migration of soaring birds, i.e. storks and raptors, occurs year-round in some form and numbers can be spectacular in the peak seasons of March-May and August-October, almost invariably during periods of westerly winds. The principal species are Honey Buzzard and Black Kite, which both produce daily counts of thousands at peak times. Significant but lesser concentrations occur of Egyptian Vulture and Griffon Vulture, Short-toed Eagle, Marsh Harrier, Hen Harrier and Montagu's Harrier, Sparrowhawk, Common Buzzard, Booted Eagle and Osprey, among others, as well as White Stork and Black Stork.

One of the top migration sites in the Western Palearctic region, Gibraltar is most famous for raptors and more than 250,000 birds of up to 17 species cross the Mediterranean here, where the North African coast is only 25km away. Black Kite and European Honey Buzzard are the most numerous species but Short-toed Eagle and Booted Eagle, Egyptian Vulture, Accipiters and harriers are also common.

In addition to raptors many other species use this route including both storks, Common Crane, Hoopoe and cuckoos as well as numerous migratory passerines, e.g. thirty species of warbler have been recorded.

Over the sea shearwaters, petrels and Northern Gannet can be seen with various gulls, terns and skuas. Breeding birds of Gibraltar are few but include the Barbary Partridge at its only mainland European site, Peregrine Falcon, Blue Rock Thrush, the rare and localised Mediterranean race of Shag and a dark, short-winged form of Blackcap.

The local list, of some 310 species, grows annually. Recent additions have included Indigo Bunting (April 2004) and Purple Gallinule (August 2004). The list includes a particularly comprehensive contingent of passerines, most of them migrants grounded on the Rock by inclement weather, often during the frequent bouts of strong easterly winds which produce the famous levanter cloud over the summit.

With increasing numbers of birders visiting Gibraltar, rarities are now frequently recorded and in recent years have included several transatlantic vagrants and also seabirds extremely rare in Europe such as Grey-headed Gull and Pintado Petrel.

More famous than perhaps the birds are the "apes" of Gibraltar, in reality they are Barbary Apes, a long-established introduction from North Africa. Botanically the Rock is of great interest with a huge diversity of flowering plants on the limestone rock with Gibraltar Candytuft one of the specialities.

The best times to visit are March-May and August-October although there is some passage across the straits at other times. March is the peak time for Black Kite and Short-toed Eagle with the greatest variety of species in April, Western Honey Buzzard peak in early May. Autumn passage begins in August when Black Kite are at their peak with most other raptors in September-early October.

Passerine migration is more prolonged, generally February-May and late July-November and seabirds can be seen passing offshore at virtually any time. Periods of westerly winds are undoubtedly the best for watching raptor migration as easterlies tend to displace them westwards.

One of the best areas for raptors in spring is Jew's Gate just past the entrance to the Upper Rock Nature Reserve, where there is a bird observatory and information centre.

In autumn the Upper Galleries and Princess Caroline's Battery to the north are more productive but the smaller passerine migrants can appear in any well-vegetated area on the Rock. Barbary Partridge can usually be seen from the Mediterranean steps, a footpath on the eastern side of the Rock.

The Botanic Gardens at Alameda often attract passage and wintering passerines, especially warblers and also Hoopoe, as does the cemetery in the north of Gibraltar. Europa Point on the southern tip is an excellent seawatching site at any season. Yellow-legged Gull breed on the cliffs and in the city where both Common Swift and Pallid Swift breed.

The sea-caves at the foot of the cliffs provide nesting sites for small numbers of Shag in summer and winter roosts for Eurasian Crag Martin.

Hotel accommodation is plentiful on Gibraltar and there are numerous campsites just over the border in Spain.