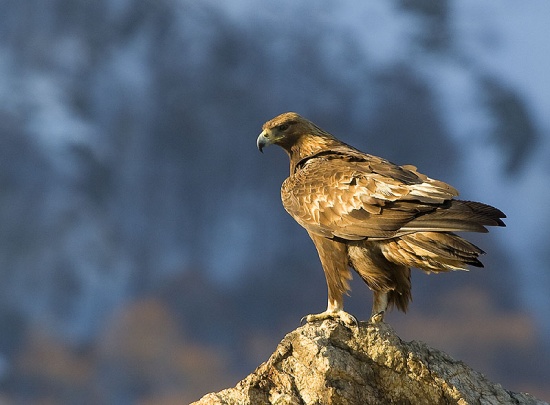 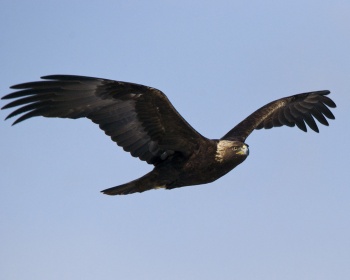 A very large eagle where birds in northern Europe are about 80-93 cm (31-37") in length, wingspan of 190 to 210 cm (75-83"); birds in the US and southern Europe are smaller. Females are larger than males.
Adult: body is dark brown with a golden wash across crown and nape (in some birds golden may be replaced by light reddish). Underwing coverts like the body while upperwing greater and middle coverts are washed pale. Flight feathers and tail feathers grey with some dark barring and with broad, terminal black band. Legs covered with feathers but toes are yellow as is the base of the bill.
Juvenile: body slightly darker and more even than adult, lacks the pale impression from upperwing coverts. Tail bicolored, black outer and white inner. Also bases of primaries and outer secondaries are white, producing a clear white area in the open wing both when seen from above and below, the size and shape of which seems to show some individual variation.
Immatures: Gradual change from juvenile to adult flight feathers and tail in that complete replacement of these feathers take 3-4 years. The pale area on the upperwing coverts can be seen in second winter (second basic plumage).

tail is long, about as long as the wing from front to back. Primaries and the innermost secondaries are a little shorter then the central and outer secondaries, producing a secondary bulge.

See other large raptors such as Imperial Eagle and other members of genus Aquila as well as White-tailed Eagle (for Europe and Asia), and Bald Eagle in the US. Look also at Rough-legged Buzzard/Hawk which in flight can show white in wings and tail similar to the juvenile Golden Eagle. 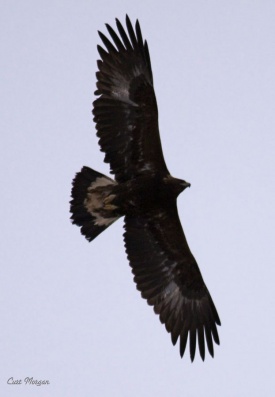 North America: Breeds over most of Alaska and in Canada except south-central and south-eastern parts. In the USA found in hilly and mountainous areas throughout the west and south to California and north and central Mexico. May also breed in very small numbers in the northern Appalachians. In winter occurs from southern Canada south to Mexico and in small numbers in the eastern USA but rare as far as Florida.

Europe: Breeds in north and west Scotland, most of Norway, north Sweden, in small numbers in south Sweden and Denmark (first record in 1999), Gotland, and north and central Finland. To the east breeds in northern Poland, Estonia, Belarus and north Ukraine, and in western and Arctic Russia. Further south breeds in parts of southern France, on Corsica, Sardinia and Sicily, in the Alps and Apennines, in the Carpathians and at scattered sites throughout the Balkans, and Crete. Widespread in Spain but nearly extinct in Portugal. In the UK, very small numbers are now breeding or at least attempting to do so in south-west Scotland.

Africa: Breeds in small numbers in the mountains of Morocco, Algeria and Tunisia.

Middle East: Breeds in very small numbers in Sinai and Israel, and across much of Turkey and the Caucasus. The first breeding record for Jordan was in 1990.

Asia: Range extends from the Urals east to the Pacific coast of Siberia, China, Korea, and Japan. 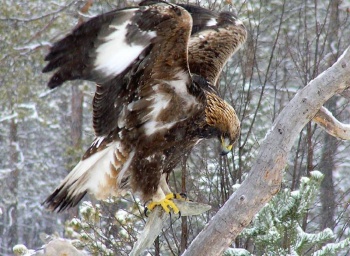 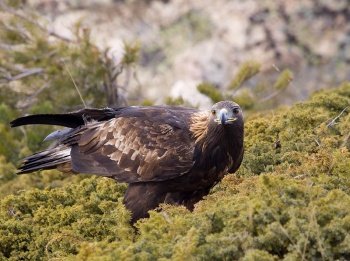 They are able to tolerate varied habitats including high mountains, hills, and lowlands, where sufficient amount of prey is available. They nest on rocky cliff faces or in large trees, hunting in open forest (less frequent), forest edge and areas of open grassland, heather, or semi-desert. In areas with human persecution, they tend to be limited to inaccessible areas. 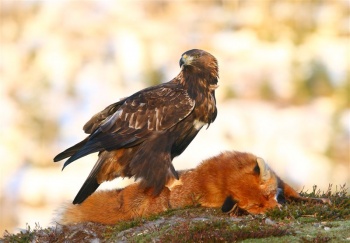 In areas where the birds are resident year round, the pair often stay together throughout the year, but pairs may break up. Pair bonding is ensured by several behaviors, including aerial display, pair flights and soaring, perching together, and copulations both during and outside of breeding season.

The nest consists of heavy tree branches, lined with grass, leaves, moss, lichens, or other soft materials, and is placed in a large tree or on a rock ledge (more rarely on ground or on man-made structure). The nest is large and gets larger each year it is used. The birds most often have more than one nest in their territory, and will reuse a nest unless they have been disturbed in the previous attempt.

The female lays an average of two eggs between January and May; laying period depends on location and is often timed to the abundance of the preferred prey at the location: in Alaska the young hatch about the same time that the marmoset wakes up from hibernation and the birds are ready to migrate when the marmosets go back to hibernation. Hatching takes place 40-45 days after laying, and because the female starts incubating after the first egg, hatching is asynchronous. Therefore, the offspring differ in size; if food is less abundant all but the first nestling will perish.
Hatchlings are greyish-white, covered with down. Fledging takes place between 45 and 81 days later (US data); at this time most feathers are developed, but as the flight feathers are not fully developed at fledging, earliest hunting attempt about one month after fledging. Young stay with parents for at least two month in migratory populations, and sometimes much longer in areas where the birds stay year round. 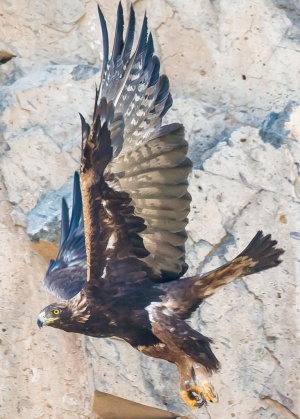 This species uses perch hunting, high soaring, or contour hunting depending on landscape, weather, and available prey species; most prey is captured on the ground or for birds, low over the ground. Mammals constitute 80-90% of prey. They feed primarily on hares and large rodents, and other similarly sized mammals and birds, but they take a wide variety of prey. They are able to kill animals up to the size of sheep, Canada Goose or Sandhill Crane, and are known to take Hen Harrier. Carrion makes up a significant part of their food, and in season, they will rob nestlings from nests of larger birds. Golden Eagles are capable of pair hunting, but at least in one study, the success rate was lower than for a bird hunting alone.

Northernmost birds, particularly juveniles, move southwards in winter. Wanderers from the north of Scandinavia are seen annually in Denmark but rarely further south. Other migratory birds are occasionally seen at Gibraltar and the Bosphorus. In the east a vagrant to south-east China.

Search for photos of Golden Eagle in the gallery

Search for videos of Golden Eagle on BirdForum TV