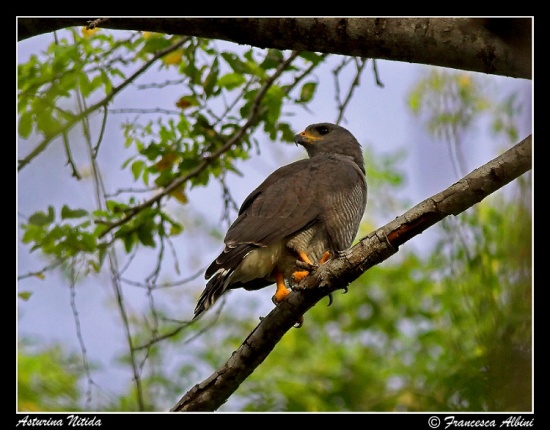 38–43 cm
Adults are generally easily recognized by the gray-and-white barred underparts and broadly white-banded black tail.
Juveniles have mostly brown upperside with a paler area on the central (folded) wing. Sides of head is white with bold black stripes and underside is white with bold brown spots. These may organize into stripes on upper breast and barring on lower breast while they are absent in the vent area.

Notice the wings on the flying bird have some similarity to Broad-winged Hawk. Primary 6 generally more pronounced giving a 5 fingered appearance.The coloration of the adult is fairly unique within the range except in Costa Rica where Gray-lined Hawk may overlap in the central or southern part of the country[6]. 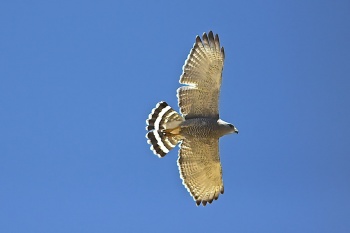 Found from southern Arizona, New Mexico and Texas through Mexico and Central America south to Costa Rica where this form is found in large parts of the Caribbean lowlands and south to at least Jaco on the Pacific side.

It was formerly considered conspecific with Gray-lined Hawk. 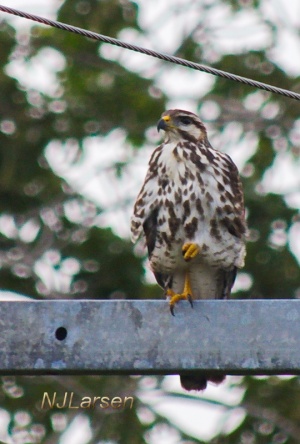 Formerly placed in the monotypic genus Asturina. Riesing et al. (2003) presented genetic data indicating that Asturina is nested within Buteo. This reclassification is supported by virtually all authorities since then: Banks et al. (2006), AOU (2006 supplement), Clements (2007), SACC (2006). The Opus follows in this consensus.

Woodland and forest, but sometimes in more open habitats with scattered trees. Mainly in lowlands, but locally up to 1800 m (5900 ft). Generally fairly common, but rarer in its limited US range.

Feeds on a wide range of small animals, mostly reptiles, but also birds, rodents and insects.

Search for photos of Gray Hawk in the gallery