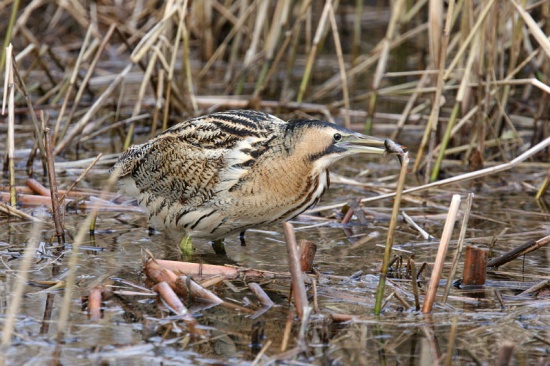 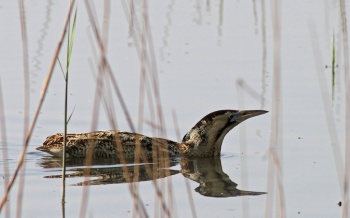 American Bittern is smaller; has no black crown, but instead a black patch on the side of the neck. In flight, superficially resembles a huge owl. 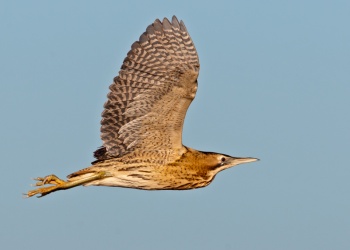 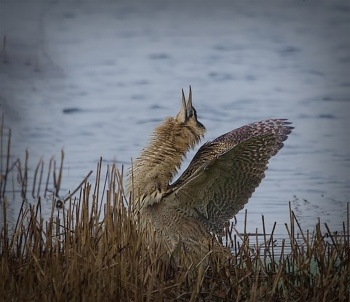 Eurasia and Africa.
Europe: breeds at very scattered localities from the Mediterranean north to central Sweden, southernmost Finland, just north of St. Petersburg in Russia, and to a line going east-southeast from there to Asia. Resident locally in England, parts of France, Iberia and northern Italy as well as in the Balkans and Turkey. Summer migrant to areas north and east of there, with partial residency in for example Denmark. In many borderline areas may migrate if inclement weather hits, but populations also diminish after colder than normal winters. Scarce winter visitor in Scotland and Ireland. Vagrants recorded Iceland, Faroes and Norway, Cyprus, and on the Azores, Madeira and Canary Islands.

Middle East: May breed in Israel, probably breeds in Iraq, and vagrants recorded in Syria and Jordan.

Asia: More widespread to the east, occurring across much of temperate Asia from the Caspian to the Pacific coast breeding in the Russian Far East and Sakhalin, perhaps also Hokkaido (Japan). A widespread winter visitor in southern China, northern India, and the northern Philippines. Single records from southern India, Sri Lanka and some countries in south-east Asia.

Africa north of the Sahara: Resident and winter visitor in the Nile delta and in one to two locations west of that along the Mediterranean coast.

Africa south of the Sahara: The subspecies B. s. capensis is resident discontinuously from southern Tanzania and Zambia south to the southern Africa where rare. This race is probably resident with local movements; these may be governed by rains but is also described as poorly understood. Nominate B. s. stellaris occurs as a winter visitor along the Nile to Kenya and west from there to Nigeria. 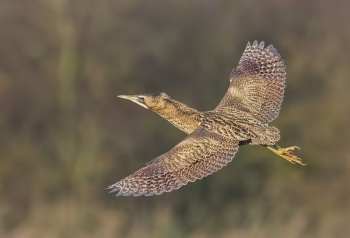 Densely vegetated swamps with small areas of open water but prefers extensive reedbeds. Sometimes in smaller reed-patches or other vegetation but rarely seen in the open.

On passage and in winter may become more obvious and occurs in a wider range of wet habitats, sometimes around disused gravel-pits and reservoirs.

The bird is secretive and very difficult to spot if it does not break cover. It is superbly camouflaged for its reed bed habitat and uses this to stalk its prey. When threatened, often stretches up in a slender pose to maximise camouflage among erect reed stems.

They feed in a similar manner to the Grey Heron, stabbing and snapping with its sharp beak and can remain hunched and utterly motionless for hours at a time.

When moving it is generally in a slow, creeping stalk that is difficult to pick out though it does sometimes dart rapidly forwards.

Bitterns do fly from reed bed to reed bed and this is a good time to spot them. Their flight is low and rapid with relatively slow, powerful, purposeful wingbeats.

Male Bitterns make a booming call to announce territory and display to potential mates. Both sexes make a guttural croak in flight infrequently.

Search for photos of Eurasian Bittern in the BirdForum Gallery

Search for videos of Eurasian Bittern on BirdForum TV