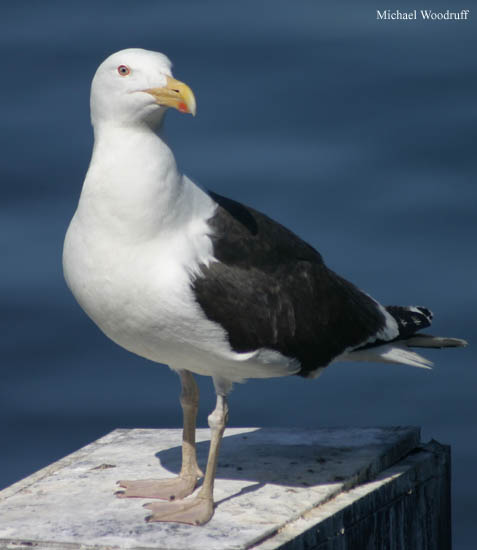 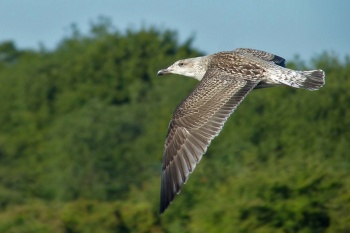 They take at least four years to reach maturity, development in this species being somewhat slower than that of other large gulls.

Lesser Black-backed Gull, which is smaller, has a lighter back and yellow legs.

Breeds on the European and North American coasts and islands of the North Atlantic.
In Europe breeds on Svalbard, in Iceland and the Faroes, the north and west coasts of the British Isles, Channel Islands and Brittany. Also in Denmark and the Baltic States, around the coasts of Scandinavia and the Kola Peninsula. Bred for the first time in Latvia in 1992 and the Netherlands in 1993.

Migratory in the north but resident or dispersive over most of range. In winter range more extensive in Britain and on coasts from the southern Baltic to the western Mediterranean. 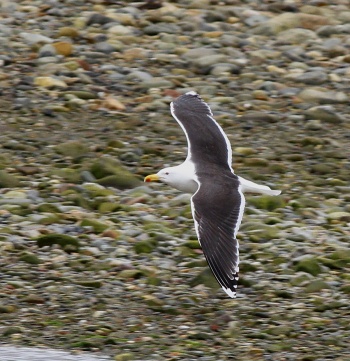 Vagrant to most European and Middle Eastern countries out of normal range, also the Azores, Madeira, Canary Islands, North-West Africa and Malta.

Breeds on rocky coasts, islets and stacks, on inland freshwaters in some areas. Nests on buildings in some areas and also low flats coasts where not persecuted. When not breeding on coasts and at sea over continental shelf, also frequents fishing harbours, refuse-tips and playing fields.

These are omnivores like most Larus gulls, and they will scavenge as well as seeking suitable small prey. They frequently rob other seabirds of their catch. It can swallow a puffin or a small wild duck whole.

They breed in small colonies, or alone. The ground nest is lined and positioned on cliff tops or rocky stacks. The clutch consists of 3-5 eggs.

Search for photos of Great Black-backed Gull in the gallery