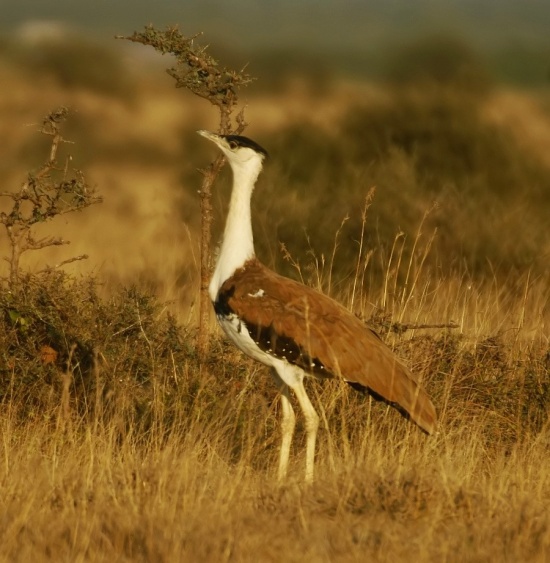 Females are much smaller, have a white supercilium below black crown, are greyer, have a more distinctly barred neck without plumes and rarely show a breastband.
Immatures are similar to females, but have buff spots on crown, upper back and hindneck, no breastband and a more heavily barred neck and breast. 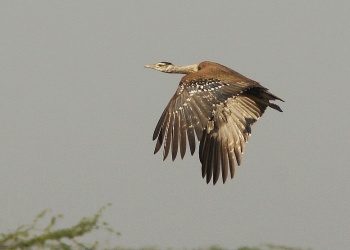 Patchily found in northwestern and central India.
A critically endangered species. Extinct in Pakistan and has been extirpated from more than 90% of its former range. Now confined to small patches of grassland, mostly in nature reserves. Population estimated at less than 300 birds, mainly in Rajasthan. Threatened by rapid habitat loss and hunting.

This is a monotypic species.
Forms a superspecies with Australian Bustard and has been considered conspecific with the latter and Kori Bustard. 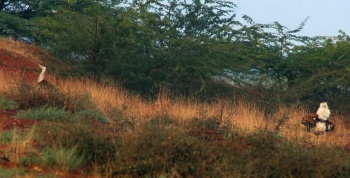 Like Kori Bustard this species sits down to drink, unlike other bustards.

Breeding throughout the year, varying with area and rainfall. Displaying male inflates white-feathered gular pouch, folds tail over back and struts about with drooped wings and head held high, calling periodically.
The nest is a shallow scrape, often with no cover. Lays 1 egg, sometimes 2.

A sedentary or seasonally nomadic species.

Search for photos of Great Indian Bustard in the gallery