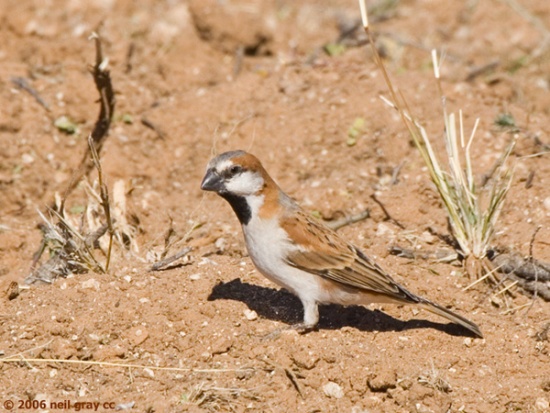 Females have the same plumage pattern but are duller and the chestnut on the head is replaced by creamy buff. Juveniles resemble females but look more washed-out.

Similar to Kenya Rufous Sparrow but ranges don't overlap. Also similar to the introduced House Sparrow, but it's larger, the colours are brighter, and the rump is rufous rather than grey.

Less sociable than most sparrows and usually encountered in pairs.

Feeds on seeds of grass and cultivated cereals. Nestlings are fed with insects.

Breeding season from September to February. A solitary breeder. The nest is a dome of the size of a rugby football with an entrance at the top end and made of grass. It's placed in a thorny tree, sometimes in a rock crevice. Lays 3 - 6 eggs.

Search for photos of Great Sparrow in the BirdForum Gallery