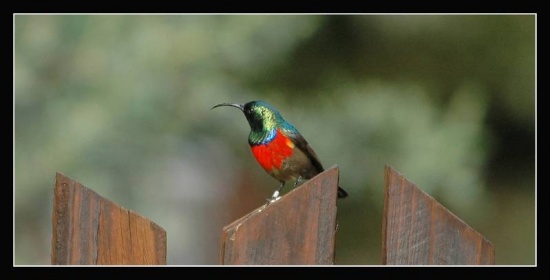 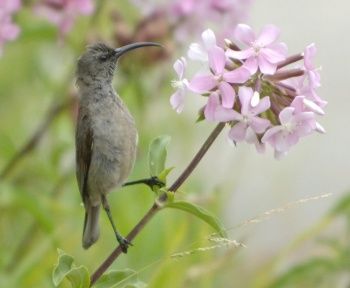 14 - 15 cm and 11 g
The male Greater Double-collared Sunbird has a brilliant red band across the chest. As with other sunbirds the bill is long and decurved. The bill of this species is longer and more curved than that of the Southern Double-collared Sunbird. The bill, legs and feet are black. The eye is dark brown. The male has a brilliant glossy, metallic green head, throat upper breast and back. A narrow metallic blue band separates the green of the upper breast from the wide red breast band, below which the breast and belly are smoky-grey. The rump is blue When displaying bright yellow pectoral tufts can be seen on the shoulders.
The female is brownish grey above with yellowish-grey underparts.

Compared to the Southern Double-collared Sunbird, this species is larger, the bill is significantly longer, and the band across the chest is wider.

Southern and eastern South Africa and Swaziland. It is mainly resident, but partially migratory in the northeast of its range. 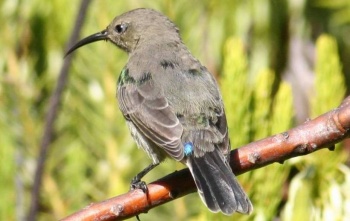 This is one of the many Sunbirds that have recently been moved to the genus Cinnyris from the genus Nectarinia.

The Greater Double-collared Sunbird occurs in coastal and riverine bush, forest edge, montane scrub, Protea savannah, parks and gardens. It is usually solitary or in pairs.

Highly active birds chasing each other and other sunbird species about.

Has the habit of hovering in front of webs to extract spiders. It lives mainly on nectar of flowers, as well as fruit, insects and spiders.

They breed all year round, with a peak from July to November. The nest is an untidy round oval of grass, dry leaves; bark shreds seed cases loosely bound together with spider webs. It has a side top entrance with a porch or hood, and is usually lined with feathers.

The call is a sustained jumble of tweeting, twittering and chipping notes, richer than the calls of the Southern Double-collared Sunbird.