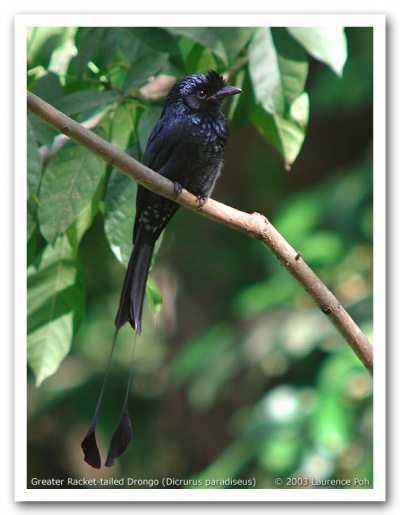 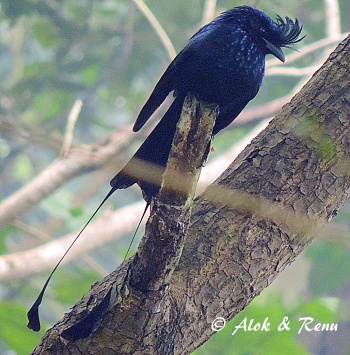 Sexes similar.
Immatures are browner, less glossy, have a brown eye and a shorter tail with smaller tail-rackets.

There is no crest in birds from Borneo. Additional variation described under each subspecies.

Lesser Racket-tailed Drongo has a rounded tail with flat rackets and a distinctly flat-headed appearance. 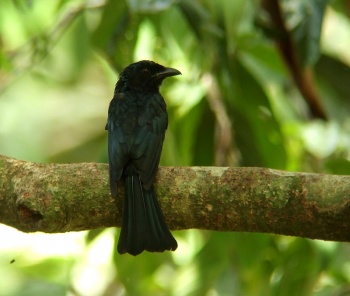 Found in the Himalayas from North India east to Nepal, Bhutan, southern China (Tibet, Yunnan, Hainan); on the Indian Subcontinent, Sri Lanka, Burma, Indochina and south to Malaysia, Sumatra, Java, Bali and Borneo.
Common in parts of its range. Rare on Hainan.

Has been placed in the genus Dissemuroides in the past.

Sri Lanka Drongo D. lophorinus has been split from this species. 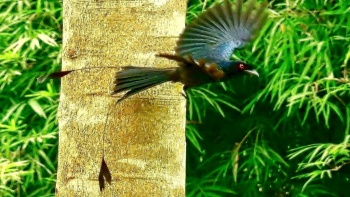 If territorial, is aggressive and will mob intruders, even large raptors and hornbills.

Found usually in the middle storey. Like most drongos, hawks after insects from open perches.

Breeding season mainly from April to July. Pairs apparently stay together their whole lives. The nest is a small cradle made of fine twigs, rootlets, grass stems and other vegetable fibres. It's placed 5 - 15m above the ground in a tree. Lays usually 3 eggs. Brood parasitism by Indian Cuckoo reported.

A superb mimic of the calls of other birds but always has a metallic sound.