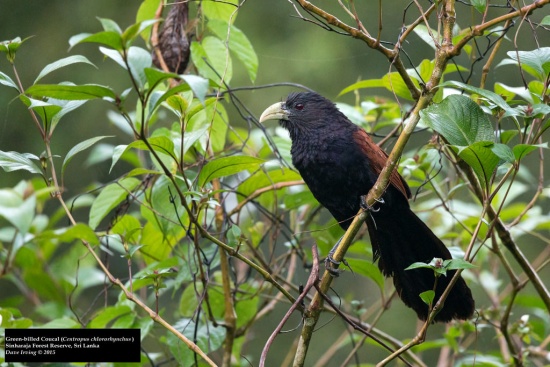 Sexes alike but females are larger. Juveniles are similar to adults but their eye is grey (not red) and the bill is greenish with a dark grey base and culmen.

Endemic to Sri Lanka. Found locally in wet zone of south-western Sri Lanka, especially in Sinharaja Rain Forest and at Kitulgala.
A rare and still declining species, threatened by continued loss of forest to agriculture.

This is a monotypic species[1].
The scientific name is sometimes spelled chlororhynchus.

Found in humid high evergreen forests with dense undergrowth in the wet zone of the island. Often in bamboo and rattan cane. From lowlands up to 800m.

A very shy and elusive bird, better known by its calls than by sight.

Ominvorous. Forages on the ground and in trees and creepers.

Breeding season mainly May to July. The nest is domed or globe-shaped and made of twigs, roots and grass. It's built near the ground. Lays 2 to 3 eggs.

Search for photos of Green-billed Coucal in the gallery