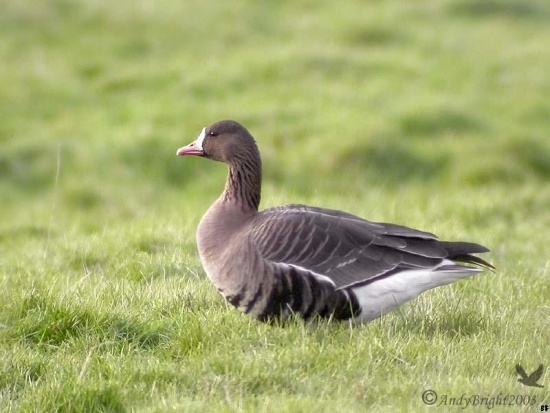 Adult: a medium-sized grey goose with a stout bill. Has a white forehead that does not continue up onto the crown, and black bars on the belly. Legs bright orange; bill pink or orange (see subspecies, below). Eye dark, usually with no visible eye ring.
Juvenile: plainer grey without white or black; the white forehead and black belly bars moult in steadily through the first winter and are usually fully developed by the time they migrate north in spring. Bill less brightly coloured, smudged blackish. 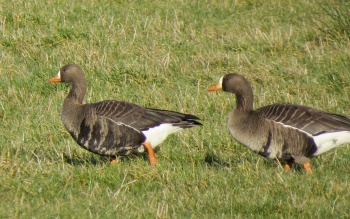 The Lesser White-fronted Goose is the main confusion species, differing in its small size, small stubby bill, bright yellow eye ring, and more extensive white on the forehead extending to the crown.

Immature birds, lacking the white forehead and black barring, may be mistaken for a number of other species, notably Taiga Bean Goose and Tundra Bean Goose; they can usually be distinguished easily as their adult parents will be nearby, but lone lost individuals are more difficult - the best feature is the fairly plain grey neck and head, less contrasting than the dark necks and heads of the two bean goose species.

Partially white domesticated Greylag Geese with a white base around the bill, are a common source of confusion for novices; they can be told by their much larger size, and (as typical of domesticated geese), very fat, heavy rear parts and more upright stance, and confiding behaviour (White-fronted Geese are usually quite wary). 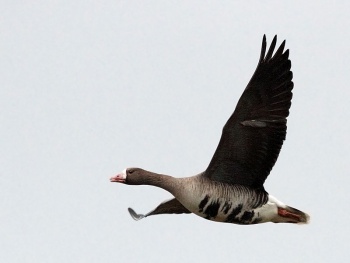 Has an almost circumpolar breeding distribution, from northern Russia through Siberia, Alaska, and Canada to Greenland.

In winter it migrates south but in some cases at the same time strongly east or west of due south; for example the Greenland subspecies winters migrates southeast, and western Russian populations of the nominate subspecies migrate west-south-west. Other populations come south to western and southern Europe, China, and Mexico. 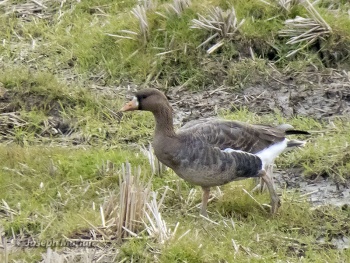 Breeds on the west coast of Greenland; winters mainly in Ireland and western Scotland, also rarely in Wales, northern England, and the east coast of the USA.

Taiga in south of Alaska near Anchorage; winters in Sacramento Valley, California.

Taiga of north-western Canada and western Alaska; winters south-central USA, northeast Mexico (includes the type specimen of A. a. frontalis).

Western Alaska; winters western USA and northwest Mexico (synonym A. a. frontalis as to popular usage, but not type specimen[3]).

The Greenland subspecies (Greenland White-fronted Goose A. a. flavirostris) is the most distinctive, with much darker plumage overall and only a very narrow white tip to the tail feathers, and also the bill is yellow-orange (the other subspecies all have a pink bill). It also differs in behaviour, with exceptionally persistent family relationships including grandparenting[5]; it may be better treated as a separate species[5]. The other subspecies differ slightly in size, with A. a. elgasi the largest and heaviest-billed, and A. a. albifrons the smallest. A. a. elgasi can also show a narrow yellow eye ring as in Lesser White-fronted Goose, though its much larger body and bill size makes confusion improbable.

They breed in areas of open tundra, near bogs and marshes. In winter they use rough grassland, saltmarsh, lakes and rivers, usually near coasts.

Typical clutch is 4–5 creamy white eggs with occasional larger clutches attributed to egg dumping. Bowl-shaped nest on the ground is made of dry grasses, sedges, lichens and moss, and is lined with down. Incubation by female.

Almost entirely herbivorous. They eat a wide variety of plant matter from roots through stems, seeds, berries, and also potatoes and grain.

Calls higher-pitched and more hurried than Greylag Goose. Laughing Flight Call of 2 or 3 syllables. Also a low murmur or gang-gang call; low buzzing given by large feeding flocks. Alarm Call is a loud mew. Also rolling and cackling, preceded by a loud high-pitched sound and a honk, similar in characteristics to those of other Anser geese.