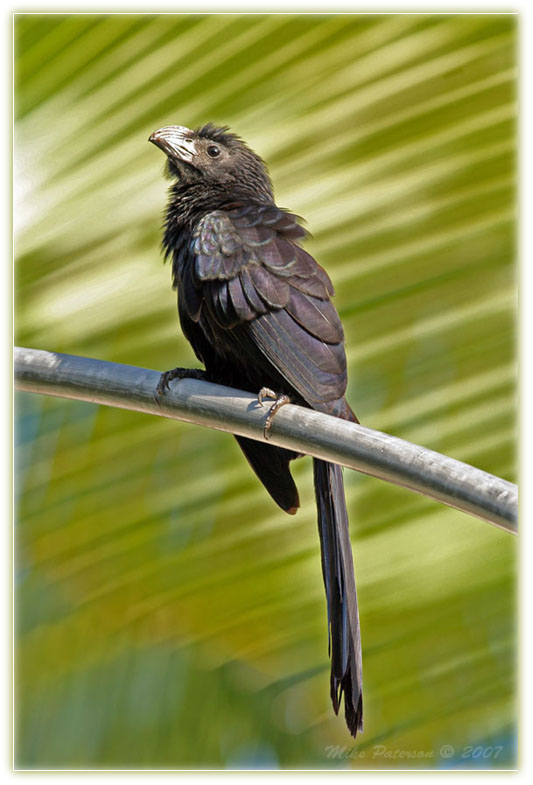 Sexes similar. Juveniles are dull black and have a loose-webbed plumage, bill without grooves.

Southern Texas and central Mexico, Central America, northern Colombia and Venezuela, coastal Ecuador, Peru and northernmost Chile; may also occur in Bolivia, but seemingly only accidental in Argentina.
Leaves northern-most areas of Texas and Mexico in the winter.
Common to abundant in most of its range. Much less common than Smooth-billed Ani in areas of sympatry.

Relatively open areas with bushes. Occurs from sea-level up to 2300m.

Usually encountered in groups. In flocks of 30 to 40 birds outside breeding season.

Feeds on insects. Takes also small vertebrates like lizards, and seeds and berries.
Forages in groups, walking on the ground, often among cattle looking for what they disturb. Occasionally follow army ants.

Season differs through range, May to July in southern Mexico, June to November in Costa Rica. A cooperative breeder, several females may lay in one nest, each attended by her male. The nest is a large, open platform made of sticks, thorns and roots. It's placed in shrub or in a tree. Each female lays 3 to 4 eggs, up to 18 are found in a nest.

A resident but nomadic species. After breeding season birds disperse up to 1000km from the nearest breeding areas. Appears in Florida in autumn and in winter on Gulf coast.

Search for photos of Groove-billed Ani in the gallery

Search for videos of Groove-billed Ani on BirdForum TV