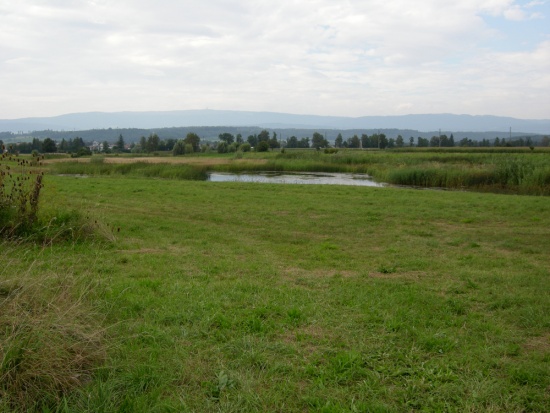 This was once the biggest marsh area in Switzerland. Today it's an agricultural area, but still with good birding sites. The Grosses Moos is close to Fanel - Chablais de Cudrefin and both areas complement one another.

Since some years, the Biotopverbund Grosses Moos creates a net of hedges, ponds and meadows. A lot of birds increased their populations, notably Corn Bunting, Common Whitethroat and Red-backed Shrike. Common Quails are also breeding, but are hard to see. Most species are just passing through. Depending on the weather conditions in April, May and September a full day of birding here can produce many species. After heavy rainfall a lot of fields are awashed and are ideal for Waders. You can expect Great White Egret, Red-footed Falcon, different waders, gulls, ducks and passerines like Yellow Wagtail, Bluethroat and Ortolan Bunting. In winter Merlin and Hen Harrier can be seen. 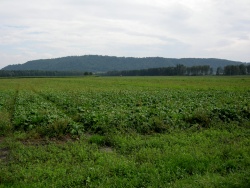 Photo by Wintibird
Field near Birkenhof

European Hare is quite common in the fields. Roe Deer can be seen sometimes. 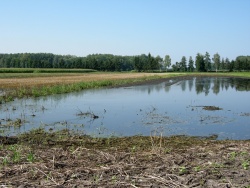 Photo by Wintibird.
A flooded field, ready for waders.

The area was once the biggest marsh area in Switzerland. It was used by farmers from the nearby villages and by the cities of Bern and Fribourg as a remote place for their prisons. After some big floods the rivers were controlled and the lake levels lowered. The Grosses Moos was cultivated and the marshland disappeared. This process was completed in 1891. Still after heavy rain a lot of fields are flooded. Since 1996 the Biotopverbund Grosses Moos has tried to reclaim some fields for nature, planting hedges, creating marshland and natural meadows.

There are some bicycle paths going through the area, but in general it's very undisturbed. 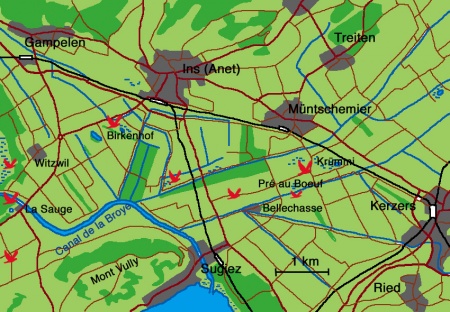 Krümmi
A very good area in the east. A small pond, some marshes, fields and trees. Attracting many migrants, including rarities like Citrine Wagtail. Hen Harrier and Great Grey Shrike are regulary seen in winter. In spring and autumn anything is possible.

Bellechasse - Pré au Boeuf
Close to Krümmi and always worth a look. Don't approach to close to Bellechasse: it's a prison.

Birkenhof
A farm with a pond and some wet meadows. Always worth a check for migrants and Barn Owl.

Fields between La Sauge and Cudrefin
West of La Sauge south of the road to Cudrefin. Good when everything is flooded. Waders leave the shore and can be find here in the fields.

Most places like Krümmi or Birkenhof can be reached by car but a much better way to explore the area is a bicycle. You can hire bicycles at the railway stations of Ins or Kerzers. Like that you will find many more birds and places. Best is to buy a map and just cycle through the area, making sure not to miss out on the mentioned spots. Going out on foot may be worthwhile, but takes a lot of time.

Especially in spring and autumn it's worth to stay more than a day here and link the Grosses Moos with Fanel - Chablais de Cudrefin. There are several hotels in Kerzers, Ins or at La Sauge. It's also possible to stay in Berne or Neuchâtel; you will need about 25 minutes to reach the area by train.