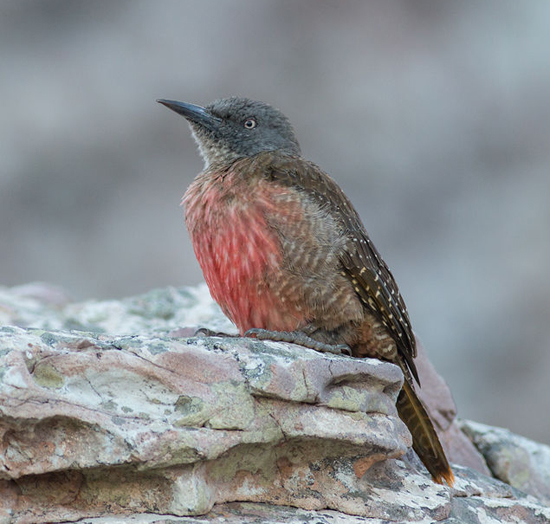 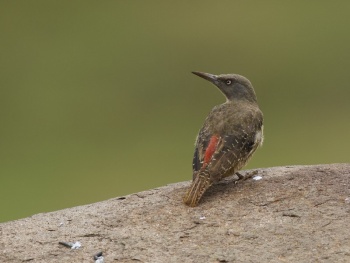 Adult male: Head grey, gradually becoming browner towards the nape, with a malar stripe that is blackish with red flecks. The wings and back are olive-brown with sparse pale yellow spots on the back. The tail is olive-brown with golden-yellow shafts. The rump is pinkish-red, and the breast and belly are pale pinkish buff. The bill is black, the inner iris is pale cream to yellow, and the outer iris is pink. The legs and feet are dark grey.

Adult female: Similar to the male, but without an obvious malar stripe.

Juvenile: Similar to the adult female, but the eyes are grey and the rump and underparts are less red.

This is a monotypic species[1], although some authorities have recognised subspecies based on variation in the shade of the reddish plumage and the intensity of the barring on the flanks and undertail.

Ground Woodpeckers forage on the ground for (almost exclusively) ants. They rarely perch in trees or shrubs, preferring rocks or mounds. Usually in pairs or faily groups of up to six birds which roost in nest-holes year-round.

Search for photos of Ground Woodpecker in the BirdForum Gallery