Length 1.0-1.2 m, mass 7.5-9.5 kg, females slightly larger than males.
Adult: Skin of the head and the bare neck, crop patch and two 80-mm breast patches are bluish; the face is bare, and the rest of the head has sparse white, hair-like feathers. Body feathers vary from off-white to russet, and the tail is dark brown. The flight feathers are mostly dark brown to black, the secondaries being whitish and tipped black below. The underwing coverts are off-white, the greater coverts often each have a black spot. 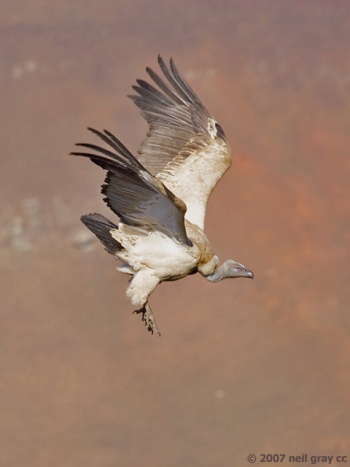 Searches for carrion over a wide variety of habitats including savanna and grassland. Roosts and nests colonially on ledges on cliff-faces in mountains.

Range and numbers have declined in recent decades due to lack of carrion and direct persecution. Classified as Vulnerable in the 2007 IUCN Red List (Birdlife International, 2007).

Adults are normally resident but may move up to 750 km from nesting site when not breeding. Young birds disperse widely. This was recently highlighted in a satellite-tracking study in which an immature female flew more than 64 000 kilometres, and foraged as far as 1 200 km from its home colony (Mendelsohn, 2007).

Monogamous. Usually nests in colonies on cliffs. The nest is built using sticks and grass, and is up to 1.0 m in diameter and 30 cm high. A single egg (rarely two) is laid May-June. Nest predators include Chacma Baboons which take eggs, and Verreaux's Eagles which take nestlings.

Search for photos of Cape Griffon in the gallery