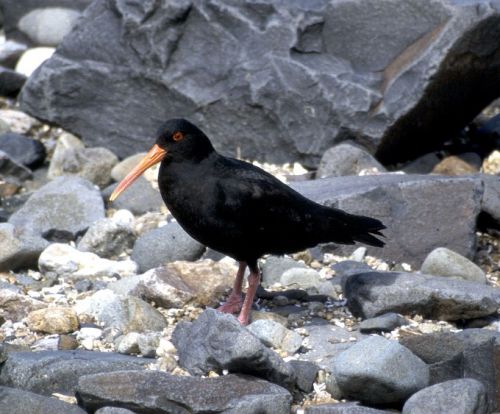 The black phase is the commonest throughout New Zealand, but the proportion of black birds increases the further south you go. In the North of North Island, 43% are black, 22% are pied and 35% are intermediates. In central New Zealand the ratio is 85:7:8 and in the south of South Island and on Stewart Island the ratio is 94:5:1. Juvenile is brownish-black, bill is brown/black and changes colour from about 3 months. 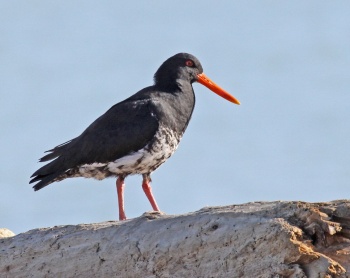 This is a monotypic species.
Chatham Oystercatcher was formerly considered conspecific with this species.

They breed on sandy beaches and sand dunes. Rocky and sandy coasts. 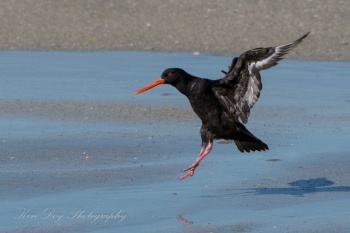 Their diet consists of molluscs, worms, crabs, small invertebrates and small fish. They use their beak to split open bi-valves, especially oysters.

The nest is a shallow scrape, sometimes lined with seaweed, on sandy beaches or rocky ledges. The clutch consists of 2 or 3 stone coloured eggs with small brown patches. They are incubated for about 28 days by both sexes. The chicks fledge at 2 days but stay with the parents to be fed for another 3 weeks. Although they learn to fly at 6-7 weeks old they don't leave the natal territory until about 3 months old.

Most frequent call is a repeated slurred piping whistle peep or a doubled pi-peep.

Search for photos of Variable Oystercatcher in the gallery

Search for videos of Variable Oystercatcher on BirdForum TV