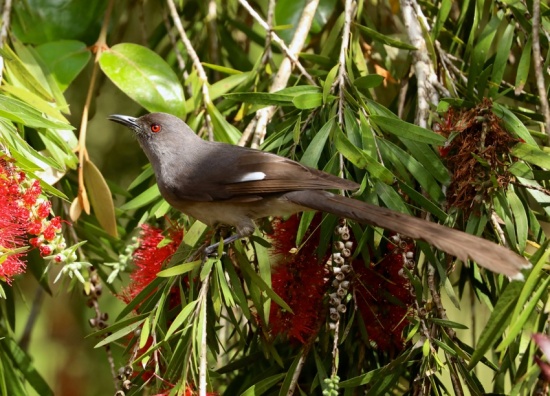 Juveniles have grey eyes. Can be confused with Grey Treepie, Green-billed Malkoha or a Blue Magpie in flight.

Found from the Himalayas (Central Nepal) east over Sikkim and Bhutan to NE India and NE Bangladesh to Myanmar, Thailand, S China (Yunnan, Guangxi) and Laos. Also south to Peninsular Malaysia and on Sumatra (Indonesia).
Very rare in Nepal but common in most other parts of its range.1

Cana is sometimes considered doubtfully valid.1
If the genera Leioptila and Malacias would be accepted, this species would be the only remaining member of Heterophasia.1

Feeds on insects, flower buds, fruits, berries and seeds. Also known to take nectar. Forages mostly in the canopy.
Seen in pairs or small groups of 4 - 15 birds, sometimes more. Often with other species in bird waves.

Breeding season from February to August. The nest is a deep cup made of moss with dead leaves, placed on a horizontal branch or suspended from thin twigs of a tree, 6 - 9m above the ground.

Search for photos of Long-tailed Sibia in the gallery