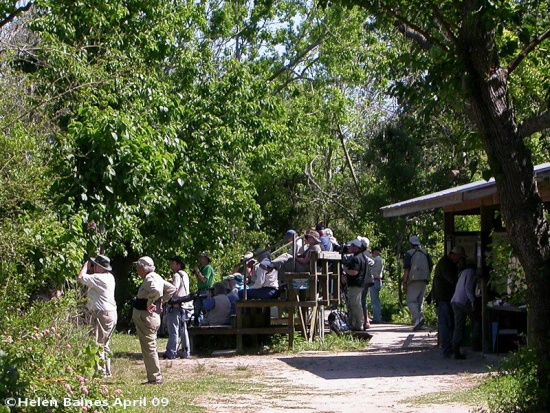 High Island is a small community on the Gulf Coast of SE Texas, which is famous as a migrant trap for birds returning to the USA in the Spring. There are 4 sanctuaries, owned and maintained by the Houston Audubon Society, the most well-known being Boy Scout Woods (photo right) and Smith Oaks. The area was impacted quite dramatically by 3 hurricanes in 4 years, most recently Hurricane Ike (Sept. 2008), but has recovered with the help of the Houston Audubon Society and many dedicated volunteers. 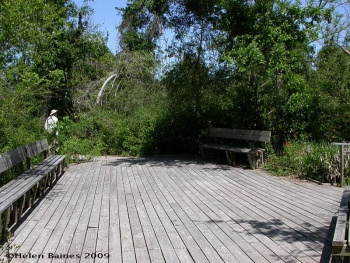 High Island is famous for the many warblers, tanagers, vireos and other passerines, which drop into the sanctuaries during spring migration. Occasionally there may be a spectacular fallout with the right weather conditions. Fall migration is also a good time for a variety of species. 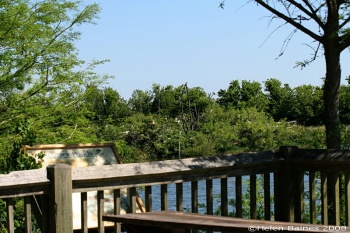 High Island is not an "island" as such, but got its name because the area rises 32 feet above the surrounding marshes, due to the salt dome below (see diagram below). Trees were able to grow in the improved soil on this hill, and so it became a very important first landfall for the exhausted birds which have just flown the 600 miles across the Gulf of Mexico, on their return from their wintering grounds in the Tropics. 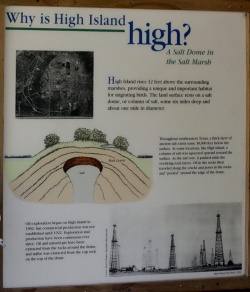 Photo by HelenB
Information board about why High Island is high. Click on image for a larger version.

Directions
High Island is on the coast to the east of Galveston Bay. From Houston, take I-10 east, exit for Winnie and go south on Hwy. 124. Another way is to go through Galveston and cross to Bolivar on the free ferry, then follow Hwy. 87 along the Bolivar Peninsula.

Search for photos of High Island in the BirdForum Gallery