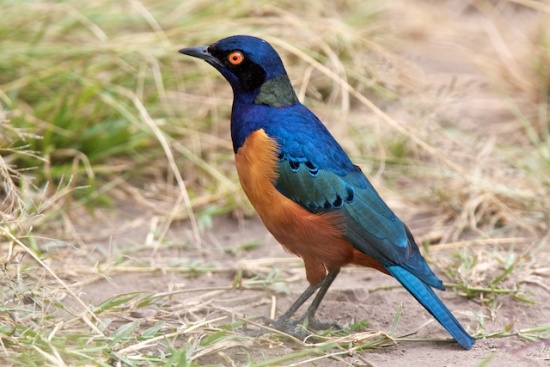 Distinguished from commoner Superb Starling by lack of white breast band and in having a paler breast than the belly. Shelley's Starling has much darker rufous underparts.

From north-central Kenya south to northern Tanzania.
Fairly common to uncommon in its range.

This is a monotypic species.
Has been considered conspecific with Shelley's Starling and both have been included in a superspecies with Chestnut-bellied Starling.

Open bush and open woodland. Also around cattle and settlements. Occurs at 500 - 2200m.

Feeds mainly on insects (like beetles and grasshoppers), may also take fruit.
Forages in pairs or small flocks on the ground. Feeds often together with Superb Starling, Greater Blue-eared Glossy-Starling or Wattled Starling.

Breeding season from March to May and October to December, May to July on Laikipia Plateau in Kenya. Co-operative breeding reported. The nest is placed in a tree hole or in an artificial hole (in a lamppost or telegraphe pole). Lays 3 - 4 eggs. Brood parasitism by Great Spotted Cuckoo reported.

Search for photos of Hildebrandt's Starling in the gallery