Honeymoon Island State Park is located on an island between St Joseph’s Sound and the Gulf of Mexico across from the Palm Harbor area in Pinellas County, Florida. Said to be a great habitat for Osprey. According to the Florida Birding Trail[1], the island has 4 miles of beaches that attract a lot of visitors. As well, it is a good place for shorebirds and migratory songbirds. 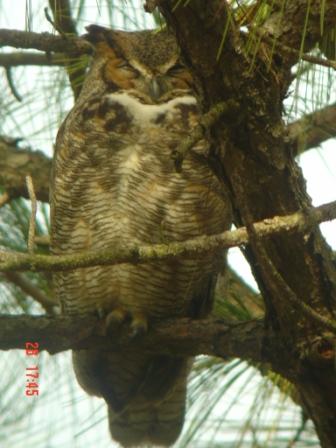 A number of migratory birds as well. Orchard Oriole, Hepatic Tanager and a number of Cardinals. Theres also a Great Horned Owl Nest with young....

The Florida State Parks webpage for Honeymoon Island State Park says the park is home to the Osprey, Snowy Egret, species of Oyster Catcher, Snowy Plover, Least Tern, Roseate Spoonbill, and Great Blue Heron among others that may be found in the area.

Other wildlife might also include the Gopher Tortoise and Armadillo, according to the Florida State Parks[3].

An island once inhabited, by Native Americans of the Tocobago tribe who lived of the marine life of the surrounding Gulf of Mexico. In the 1930’s it was purchased and developed as a honeymoon destination with the construction of cottages for that purpose. Then with the advent of World War II, it began to be utilized for the war effort in various forms. Subsequent to all that, it went through various attempts at use before ultimately becoming what it is today.

Spots within the park and surrounding area to look forward to can include its miles of beaches.

Its varying habitat which provides a wide range of places a special bird might be sighted.

The causeway leading to the island, which is said to be a good spot for shorebirds.

The Osprey Trail, which is said to be a good place to perhaps spot them nesting.

The Pelican Trail which also has two observation platforms for low tide viewing.

A nature center and periodic ranger-guided walks in some of the winter months.

Access to the park can be had by taking Causeway Boulevard off Bayshore Boulevard in Palm Harbor, Florida.

Search for photos of Honeymoon Island State Park in the gallery