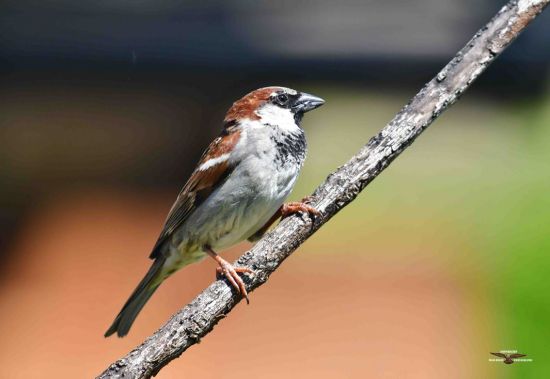 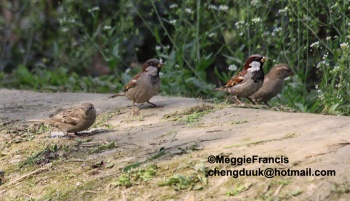 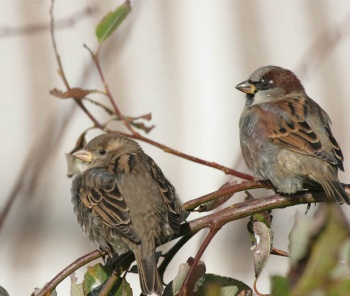 Especially females are similar to females of other species like Italian Sparrow, Spanish Sparrow, Russet Sparrow or Iago Sparrow. Sind Sparrow is very similar but smaller.

Nearly worldwide. Deliberately introduced by man on several continents, this bird is an unwelcome addition to the local ecologies, and another glaring example of the folly of the introduction of an alien species. They are now widespread on all the continents but Antarctica, and compete with native species. In the UK their numbers have been in severe decline over the years and they are now on the "Red List" of species at risk. 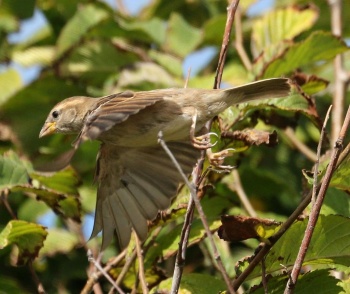 Twelve or more subspecies share the original distribution area, with P. d. indicus being smaller with whiter cheeks and more rufous in the crown. P. d. bactrianus is similar to P. d. indicus and is found in a different habitat than P. d. domesticus in the same area. In Central Asia P. d. domesticus is a resident species while P. d. bactrianus migrates to the Indian Subcontinent. Some authors therefore split P. d. bactrianus (with P. d. indicus) as Indian Sparrow.
Italian Sparrow has traditionally been included in House Sparrow, but some authorities think it is a form of Spanish Sparrow, some think it may be a stable population of hybrids between House and Spanish Sparrows, and there are more and more sources treating it as a full species. Below is a link to a discussion thread on the taxonomic status of this form. 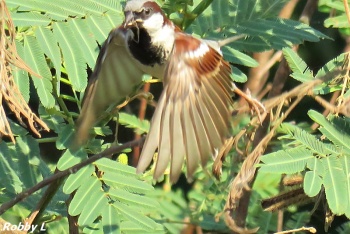 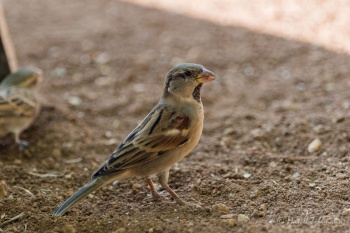 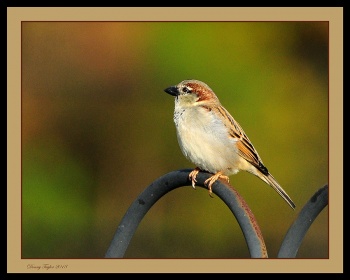 Nests of grass, wool, feathers and other soft materials are made in holes in buildings or other structures, though house sparrows will also breed in thick ivy and natural structures. The clutch consists of 4-5 glossy pale blue eggs which are incubated for about 12 days. The young fledge after about 3 weeks. There may be up to 4 broods in the season which runs from April to August (UK), though 2-3 broods is more normal.

A flock of about 200 sparrows, recorded at Titchwell bird reserve, Norfolk 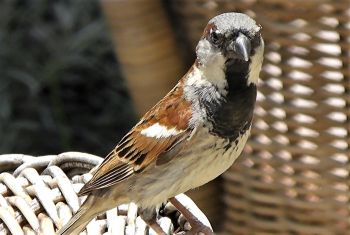 This is the classic sparrow chirp, often heard at length (up to half an hour!) in the Spring from an unmated male at the nest site trying to attract a female; although most persistent at that time the chirp can be heard from either sex all year round though for much shorter periods. Observation seems to indicate that as well as the breeding period usage of attracting a mate this call is also used to keep the flock aware of where other individuals are. A lone sparrow arriving may start up a chirp which attracts other sparrows. There is another variant of this, which has a disyllabic chirr-up, giving rise to an old English name for the house sparrow, "Phyllip sparrow" where the "phyll-ip" is onomatopoeic It is the loudest vocalisation of this bird.


This 'chattering' sound is common where there are sparrows in proximity. Although it is hard to avoid an anthropomorphic association with angry scolding, observation shows this sound can also be uttered by an individual on discovering a new food source, and may therefore also simply draw attention. It is also used to warn of ground predators


Low level churrs. Though the house sparrow is a common bird not many people have heard this sound because it is emitted at a fairly low level. This was recorded about six inches from sparrows feeding at a confined location (squirrelproof mealworm feeder) and seemed to enable the sparrows to feed in a closer proximitiy to each other (< 1 inch) than even this social bird normally permits.

Search for photos of House Sparrow in the gallery