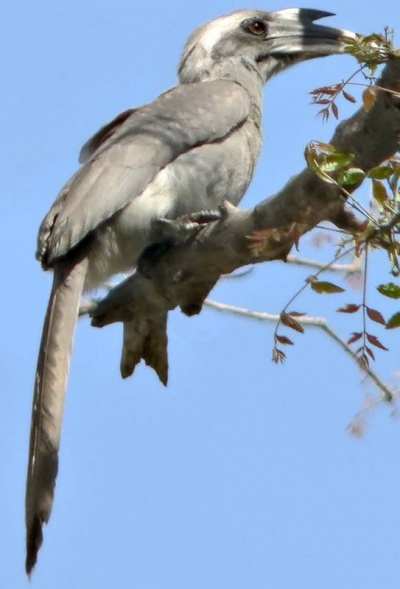 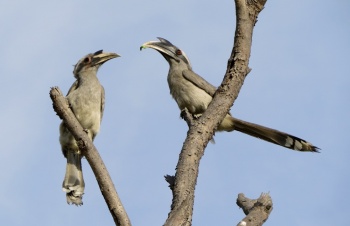 Can only be confused with Malabar Grey Hornbill in the Western Ghats, but Malabar doesn't have a casque and the bill is orange-yellow. 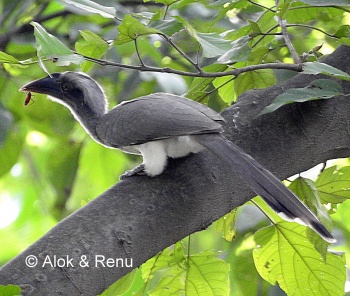 This is a monotypic species[6].

Feeds mainly on fruits (especially figs), but takes also insects, lizard, mice and nestlings of other species. Often seen flying from tree to tree, sometimes on the ground. 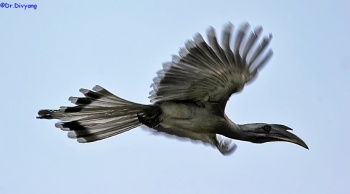 Breeding at the end of the dry season, mainly February or May to June.

They usually form their nest in tree holes. The female stays inside the nest and seals the nest hole with droppings and food leaving only a small hole. Sometimes the male also delivers some mud. Lays 2-5 eggs. While inside the nest, the female will pluck out all her feathers and throw them outside the nest so that it can maintain the required space along with the growing chicks. The regrowth of the feathers in the female coincides almost with the maturity of the chicks at which point the nest is broken open. Possibly this species is a co-operative breeder with additional males helping to feed.

Generally a resident species but food-related movement can occur. Then seen in small flock with up to 30 birds.

Two individuals were sitting together, on top of a Eucalyptus tree, at day-break ; One of them was calling ; on the side of a very busy city road.

Search for photos of Indian Grey Hornbill in the BirdForum Gallery

Search for videos of Indian Grey Hornbill on BirdForum TV