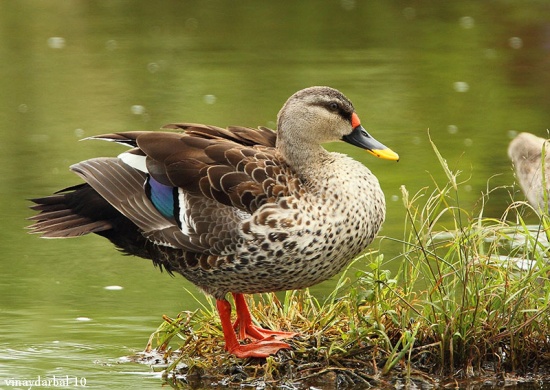 At 58-63 cm (23-25 in) slightly bigger than a Mallard.
The body is blackish and heavily scaled. The head is withish with a black cap and eyestripe. The terminal half of the inner tertial are white and the bill is black with a yellow tip. Males of the nominate subspecies and haringtoni have a variable red spot at the base of the bill, haringtoni a smaller one.
Shows a green speculum in flight. 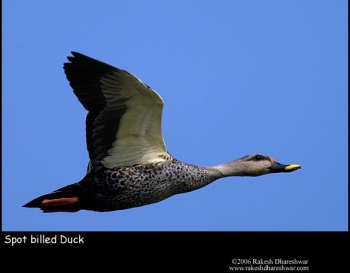 Found on the Indian Subcontinent (including Sri Lanka) and east to Burma, extreme south China and Laos.

A dabbling duck of the genus Anas. Forms a superspecies with Eastern Spot-billed Duck, Pacific Black Duck and Philippine Duck.

Various types of wetlands, at the coast and inland. Prefers shallow water with vegetation.

Breeding season variable. Usually in single pairs but may form loose small colonies. Nests in a pad of vegetation on the ground or in trees, always near water. Lays 7-9 eggs.

Feeds vegetarian, mostly seeds, parts of grasses, sedges and aquatic vegetation. Only occasionally water insects are taken. Like other dabbling ducks this species feeds head-dipping and upending in the water.

Search for photos of Indian Spot-billed Duck in the gallery

Search for videos of Indian Spot-billed Duck on BirdForum TV