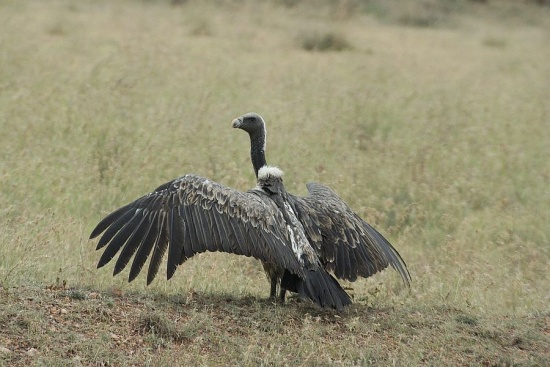 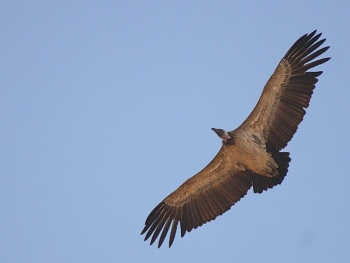 Sexes similar. Juveniles have a pale downy neck and head and diffuse streaks on pale underparts (much paler than in White-rumped Vulture) 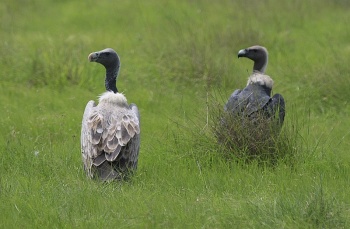 Formerly common and widespread in the Indian Subcontinent, from southeast Pakistan over much of India. Now very rare and local (see Conservation status). Range poorly documented owing to widespread confusion with Slender-billed Vulture. One record from Afghanistan doubtful.
Resident with some dispersal of young birds.

This is a monotypic species.
Slender-billed Vulture was formerly considered conspecific, the species then named Long-billed Vulture. 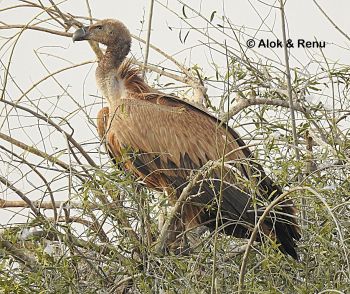 Spends much of the day soaring on thermals, looking for food.

The diet consists of carrion, usually putrid, but sometimes fresh.

Nests colonially on cliff ledges or in ruins. Locally in Rajasthan also in trees.

In some parts of their range, it is customary for human corpses to be placed in high places, for Vultures to feed on - this practise is deeply rooted in religious and cultural traditions.

This species is becoming extremely rare. The rapid decline is thought to be due to the non-steroidal anti-inflammatory drug Diclofenac, which is used in southern Asia as a livestock treatment. It is extremely toxic to vultures when they feed on the carcasses of treated cattle. The drug causes fatal kidney failure. Populations of White-rumped Vulture and Slender-billed Vulture have also declined by more than 90 percent in the years from 1992 and 2000. On the basis of their catastrophic declines, the IUCN-World Conservation Union has listed these species as critically endangered: the highest level of threat.

The February 2007 issue of the Smithsonian Magazine has an article on the problem and what conservationists are doing about it: [1]

Search for photos of Indian Vulture in the gallery

Search the Gallery for videos of Indian Vulture:

Search for photos of Indian Vulture in the gallery