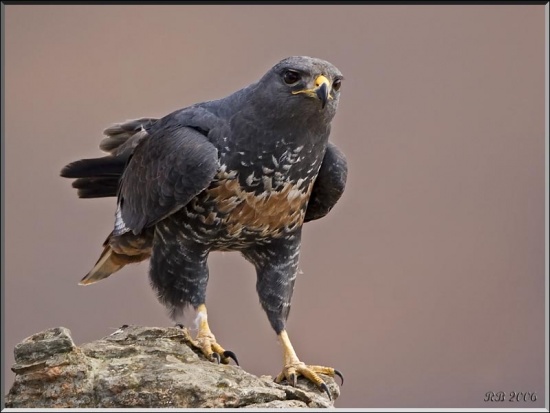 Length 44-55 cm, mass 0.9-1.7 kg. Females larger than males
Broad wings and short tail
Adult: Black above with a chestnut tail. The chin and throat are black and the breast is rich rufous, bordered by white feathers. The underwing coverts are black and the flight feathers from below are white (white barred black from above), tipped with black to form a dark trailing edge to the wing. 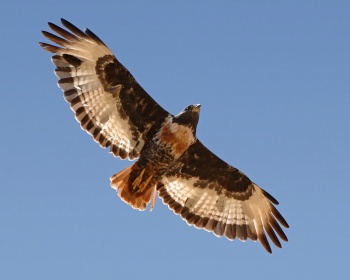 White-breasted morphs occur, and sometimes the entire underparts are white.
Dark morphs with underparts that are mostly black have also been observed, but are rare.

Juvenile: Mainly brown above and rufous brown below and on the tail.

Southern Africa: Widespread in South Africa, Lesotho, and Swaziland. More thinly distributed in Namibia. The edge of its range extends marginally into Botswana, Zimbabwe and Mozambique. 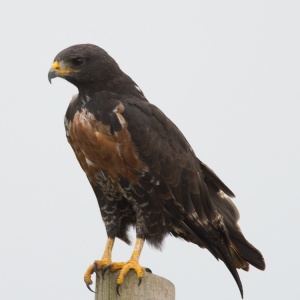 Mainly hills and mountains, although non-breeding adults and juveniles can be found in flat terrain. The species prefers short vegetation, ranging from fynbos, Karoo and semi-desert to open woodland and grassland.

Small ground mammals make up about 65% of the diet, but snakes, lizards, small ground birds, insects, and road-kill are also taken. Typically, the raptor drops on its prey after 'hanging' on an updraft, from a hover, or from a perch.

They build a large stick nest in a tree or on a crag, which may be used again in the following years. The 2 creamy or bluish-white eggs are incubated by the female, food being brought to her by the male. The eggs hatch after about 40 days and fledging is begun further 56-60 days later. At 70 days they finally leave the nest, but young birds may then be seen with the adult pair for some time. 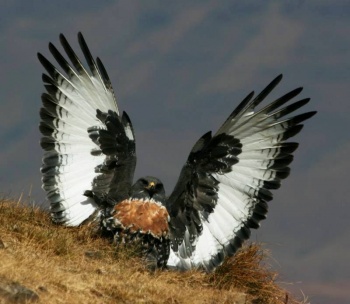 Call: A loud, yelping keeooow, similar to the call of the Black-backed Jackal.

Search for photos of Jackal Buzzard in the BirdForum Gallery